Have a juicy tidbit or two for EaterWire? Operators are standing by. 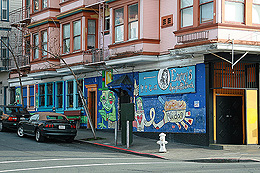 SAN FRANCISCO—The summer edition of Dine About Town is slated for June 1-15. The list of participants will be online tonight, and new participants this time around include Spruce, E&O Trading, Bacar and Isa, among others. [EaterWire]

NOE VALLEY—Just a friendly PSA to those inspired by today's Chron review: Contigo will be closed tomorrow (Friday) in order to observe International Workers Day. [EaterWire]

SONOMA—Sonoma resident Emmy Kaplan's second location of her cult hit Emmy's Spaghetti Shack has been confirmed by the PressDem. It's headed into the former Deuce space and is slated to arrive sometime in June. [PD]

SANTANA ROW—Down south, Roland Passot has declared a June opening for his foray into the steakhouse genre: LB Steak. The Santana Row hotspot will be a "modern American steakhouse that combines the sophistication of French culinary techniques with the approachability of American dining." Everyone got that? [EaterWire]