Spot a recent closure on your block? The tip jar is open for business. 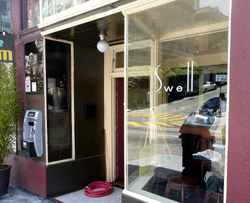 1) SoMa: Over the weekend, a pair of high-profile restaurants closed their doors as previously scheduled, albeit for the opposite reasons. We first broke the news two weeks ago, and on Saturday, Jack Falstaff rode off into the sunset after on last hurrah. Jonnatan Leiva has remained tight-lipped on his next move, while the PlumpJack Group will now turn its focus to resurrecting the shuttered PlumpJack Cafe. [EaterWire]

2) Union Square: At long last, Saturday also was the farewell for the current version of Bar Crudo. The tiny Bush Street seafood joint will now move to its (slightly) bigger location on Divisadero, and if all goes to plan, will open on Saturday the 16th. Meanwhile, the Bush Street shoebox is now under the control of neighboring Tunnel Top, which will keep the concept in place but change the name to Swell. [EaterWire]