Have a juicy tidbit for EaterWire? Drop it in the tip jar. 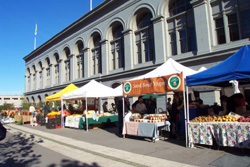 MARIN—Sometime in the next few weeks, Lark Creek Inn will reopen as Tavern at Lark Creek, and it will be doing so with a new executive chef: Randy Lewis, last seen at Mecca here in SF and then working under John Besh in New Orleans. SFoodie noted earlier today that former toque Erica Holland-Toll had put in her walking papers. [ESF/SFW]

CHICAGO—See, it's not just us who have questioned John Mariani's dubious practices. MenuPages Chicago has an illuminating explanation of the Esquire restaurant critic's shady exploits and reputation in the restaurant community. He makes two restaurateurs feel "dirty," an Alinea chef is shocked at his "douchebaggery," while he makes another chef question his own integrity for cooking for him. Oh, and did we mention the four-page list of demands he sends before visiting a restaurant? [MPC via ENY]

FERRY BUILDING—Downtown workers rejoice; the Scoop brings word that a new Thursday farmers' market will kick off at the Ferry Building come July. In addition to a "handful" of farm stands, there will also be a strong prepared food contingent from from Ryan Farr's 4505 Meats, Laiola, Pizza Politana and RoliRoti, among others. [Chron]

SILLY ADS—Well now this dirty commercial for a random foreign restaurant is just plain fun for everyone. [BuzzFeed]