Share All sharing options for: The Dish: Bar Crudo, Cibo, The Kitchen Table 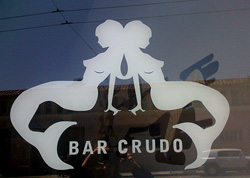 1) Western Addition: After a handful of false alarms, the relocated version of Bar Crudo is finally open in the Nopaland stretch of Divisadero. As has been mentioned before, both here and elsewhere, the new Bar Crudo is the Selvera brothers' expanded version of the original Bush Street location. That said, it's still a pretty small space highlighted by a zinc bar, plus a big mural visible from the street. The menu is accordingly expanded as well, but all the signatures remain. 655 Divisadero, at Grove, (415) 409-0679; website [EaterWire]

2) The Peninsula: Per the Chronicle, a new kosher restaurant has opened down in Mountain View. Called The Kitchen Table, the certified kosher eatery features "house-brined pickles and house-smoked meats." 42 Castro Street, at Evelyn; (650) 390-9388; website [Chron]

3) Sausalito: Also outside the city, Cibo is up and running across the Golden Gate. It's a cash-only cafe with al fresco seating from the Ancora family, the folks behind 25-year-old Sausalito resto Angelino. Open for breakfast and lunch. Update: They take credit cards now and thanks to a tipster, we have word they serve Blue Bottle Coffee too. 1201 Bridgeway, at Pine; (415) 331-2426; website [EaterWire]