Catch a new opening on your block for The Dish? Do let us know. 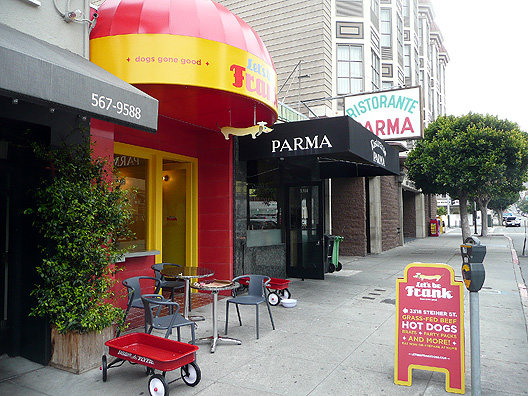 1) The Marina: The first brick-and-mortar location of Let's Be Frank is open for the first time right now. The hot dog-centric menu was posted online last week. It's a small shop, with just a few tables, but the Cass Calder Smith design is pretty literal, including some flashy Steiner Street signage. 3318 Steiner Street, between Chestnut and Lombard; (415) 674-6755; website [EaterWire]

2) SoMa: Thrillist brings word of Carte415, a new food cart making its debut today "soon". Carte415 serves gourmet food to go (think sandwiches and salads) and is the brainchild of "a guy who's exec chef'd at both Chez TJ and Michael Mina's Stonehill Tavern (in SoCal)." 101 2nd Street, in the Atrium, at Mission; (415) 567-0415; website [Thrillist]

3) The Castro: A new club with a fun name opened over the weekend on Market Street. As you may recall, it's known as Trigger and is in the old Jet space. 2338 Market Street; between 16th and 17th; website [EaterWire]

5) The Marina: More replacementwire: Marina & Kebab has made its debut in the old Pita Pit spot on Chestnut, next door to Tipsy Pig. It's from the same owners as Hayes Valley's Hayes & Kebab, and you should be able to gather its specialty from its name. 2257 Chestnut Street, between Scott and Pierce; (415) 441-9010 [EaterWire]

6) Union Square: The Morton's expansion to the adjacent Disney store is still a work in progress, but the steakhouse soft-opened a new bar concept last Friday called Bar 12.21. The new, street-level bar comes with a new bar bites menu with lower prices than the main event next door. 400 Post Street, at Powell; (415) 986-5830; website [EaterWire]

8) Napa: And finally, after a quick overhaul from the shuttered Tuscany, the Border is open on the high-profile corner of First and Main in downtown Napa. It's a Mexican restaurant from a pair of brothers who previously worked at Mustards Grill and Cindy's Backstreet Kitchen. 1005 First Street, at Main; (707) 258-1000 [EaterWire]