Spot a newcomer on your block for The Dish? Operators are standing by. 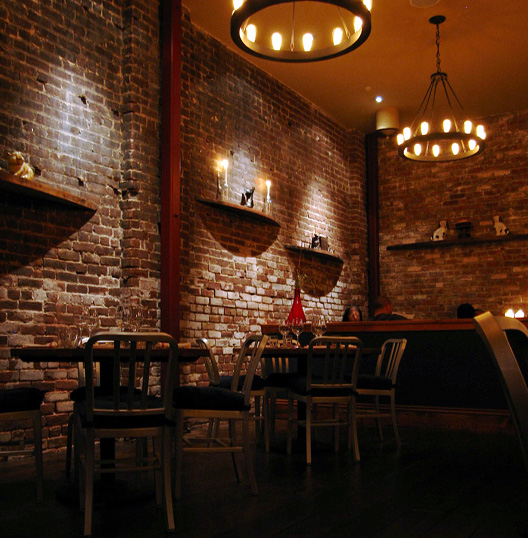 1) Redwood City: The Peninsula gets itself a marquee restaurant this week with the arrival of Martins West. The British-inspired gastropub from Michael Dotson, Moira Beveridge and co. took over the 4,500 square-foot in the historic Alhambra Theater, which you'll surely recall dates back to cowboy days of yore. Further reading on Martins West can be had in the Plywood Report. 831 Main Street, Redwood City; (650) 366-4366; website [EaterWire]

2) The Mission: Walzwerk's deli spinoff Schmidt's opened for lunch this week on the corner of Folsom and 20th. Dinner will kick off in a month or so and the liquor license hasn't come through yet, but for now, Schmidt's will be doing German sausages and similar fare. Take a sneak peek inside the 49-seater here. 2400 Folsom Street, at 20th; (415) 410-0202 [EaterWire]

3) The Marina: Plywood alum Noodle Theory opened yesterday for dinner, and today they are open for both lunch and dinner. It's the first San Francisco branch of the Berkeley noodle shop; here's hoping they outlast Ramen Club's two-month stint. 3242 Scott Street, between Lombard and Chestnut; (415) 359-1238 website [EaterWire]

4) Van Ness/Russian Hill: Last night marked the glorious return of Tajine, reborn within the ultralounge confines of the Heights nightclub. The place will still convert to the Heights on Friday and Saturday nights, but Tajine will be there Tuesday through Sunday from 5pm to 10pm, serving up a $29.95 Moroccan prix fixe. 2080 Van Ness, at Pacific; (415) 240-0145; website [EaterWire, previously]

5) Hayward: The hamlet of Hayward is often beyond our scope (not to mention comprehension), but we just had to mention a new restaurant uncovered by Thrillist called Pot Pie Paradise. A handful of the pot pie options via the menu: creole shrimp, chicken cacciatore, fiesta beef, Hungarian beef goulash, and pina colada. Lordy. 3522 Arden Road, Hayward; (510) 781-4994; website [Thrillist]