Have a hot tip for EaterWire? Operators are standing by. 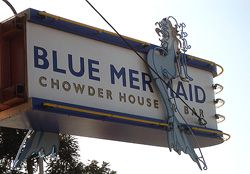 OAKLAND—Open for the first time today at 4pm is Penelope, a new bar/gastropub in downtown Oaktown. Rumor has it that it's named after Penelope Cruz. Which is weird. 555 12th Street, at Clay; (510) 529-5393; Twitter [EaterWire]

WEST PORTAL—The Examiner shares a reminder that Old Krakow will be shuttering after service on this upcoming Sunday. There's still a chance that it will relocate somewhere, but that decision won't take place for at least month. You'll recall that Clay Oven is moving in. [Examiner]

FISHERMAN'S WHARF—For the third year in a row, Blue Mermaid took home the top creativity prize in the annual Great Chowder Cook-off in Rhode Island with its Dungeness Crab and Corn Chowder. [EaterWire]