Have a juicy tidbit fit for EaterWire? The tip jar awaits. 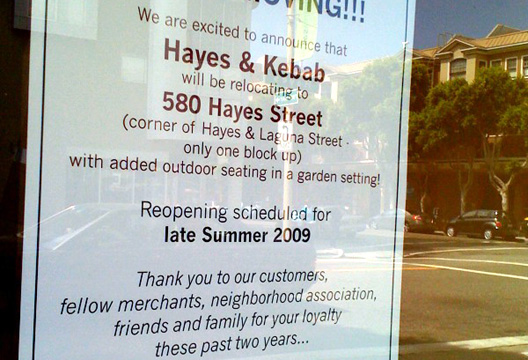 HAYES VALLEY—Via a tipster comes word that Hayes & Kebab has closed and will be moving down the street later this summer to new digs—with a garden!—at 580 Hayes, an address that has hosted a grocery store, art gallery and rug store (not all at once, probably). Meanwhile, the shuttered location has that weird layout which shares a kitchen with the space around the corner that last housed the shuttered Breezy's. [EaterWire]

THE RICHMOND—Next Tuesday, two of the more exciting chefs in the Bay, Aziza's Mourad Lahlou and Commis' James Syhabout, will combine forces for a multi-course (we count 6+) meal at Aziza as part of the Moveable Feast series to benefit CUESA. Tickets/more info can be had here. [EaterWire]

SOMA—French food truck Spencer on the Go is extending its hours: "Spencer on the go will be open on Wednesdays starting tomorrow, June 30th @ 6:00pm- 12:00pm." He probably meant July 1st. [Twitter, previously]

AD WATCH— Gawker discovers the food ads are getting more disgusting by the day: "You thought that Hardees' 'Name Our Holes' campaign was the pinnacle of pornographic fast food advertisement? You are correct. 'The A-hole tastes funny,' declares a guy in this ad, for greasy doughballs." [Gawker via Eater NY]

PIGLAND—Slate runs a provocative piece today, questioning the idyllic images of free-range pigs like those from Niman and Iberico farms. To be sure, more than a few interesting points are made regarding "ringing" and castration, but the article would be even more persuasive if it didn't quote the PETA wackjob who talked about the pigs' "life-long depression." [Slate via 7x7]