Have a juicy tidbit for EaterWire? Go ahead and toss it in the tip jar. 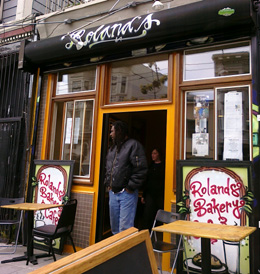 LOWER HAIGHT—A tipster sends along word that Roland's Bakery is now open on Haight. The bakery/bagel specialist from some East Coast folks will normally close at 5pm (also Tuesdays), but word on the street is that it's going to stay open until 3am on weekends. 422 Haight Street, between Fillmore and Webster [EaterWire]

INNER SUNSET—The Appeal has the entire rundown from the debut of the new farmers market. It takes place on Sundays in the parking lot right off the corner of Ninth and Irving. Initial reviews are pretty positive, so you know, yay for the Sunset. [SFA]

FERRY BUILDING—Still more market talk: we already knew Laiola (with Roli Roti, Pizza Politana and more) would be among the vendors at July's new Thursday Ferry Building extravaganza, and now the restaurant announces that its taco stand will be called Tacolicious and have the following offerings: three kinds of tacos with three salsas, homemade pickles, aqua frescas and housemade horchata. [EaterWire]

NAPA—The annual Napa Wine Auction is in the books, but the recession took its toll nonetheless. From Jon Bonne: "The auction's final haul was cut in half, to $5.66 million down from a near-record $10.35 million last year ... If there was any consolation, results were by no means out of line with other charities. Napa topped its sometime rival in philanthropy, the Naples Winter Wine Festival in Florida." [Chron]

NAPA—This week in news from The Trainwreck That Is Copia, the latest proposal sees hotel users chipping in. [NVR]