Share All sharing options for: The Dish: District 5, Pizzavino 707

Spot a new opening on your block for The Dish? The tipline awaits. 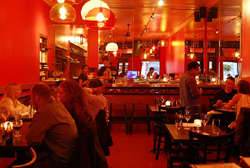 1) Western Addition: Most of the details surrounding District 5, including the menu, were revealed on Monday morning, and tonight, she makes her debut. Though Metro Kathmandu's Everest momos are still on the menu, the owners have swapped out the rest of the dishes in favor of "California comfort cuisine." As one would expect, the existing interior (pictured) hasn't changed too much in the mere week-plus of closure, and the outdoor patio will still be open for weekend brunch. 311 Divisadero, between Page and Oak; (415) 552-0903; website [EaterWire]

2) Sebastopol: Up north, Jonathan Waxman's failed West County Grill gets reborn tonight as Pizzavino 707. Though Waxman is long gone, his former partner (and Alice Waters ex) Stephen Singer is still running the show in its new incarnation. This time, he's brought Foreign Cinema's John Clark and Gayle Pirie aboard for the ride, making two openings in three days for the local duo. The PressDem has more details on Pizzavino 707, including the wine program, the building's signature wood-burning oven and future additions, like a pool table and a foosball table. Open Wed-Sun for dinner and NB, Sundays for lunch. 6948 Sebastopol Avenue, Sebastopol; (707) 829-9500; website [EaterWire, previously]