As always, the tipline is open throughout the long holiday weekend. See you back here Monday morning, bright and early. Xoxo, The Mgmt. 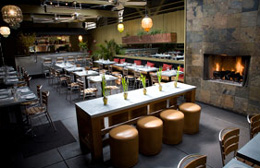 THE CASTRO—Market Street's Home has appointed Jim Wimborough to be its new executive chef, per an announcement this afternoon. Wimborough was last seen as Evvia's executive chef, and before that, he had put in time at Kokkari, Boulevard and Rubicon, among others. [EaterWire]

BERKELEY—Fresh off its 15th anniversary, Rivoli will close temporarily for the second half of July to go under the knife. According to Zagat, the restaurant will undergo a remodel by Martin/Heid (Range, Serpentine) to give it "a ranch-house feel with Japanese influences." And when it returns, there will be cocktails too. [Zagat]

JACKSON SQUARE—The prospect of selling vodka for four cents could get dangerous, but 5A5 Steak Lounge is doing just that, tonight from 10pm to 11pm. [Broke Ass Stuart]

DEPT. OF BAD NEOLOGISMS—Yeah, this will make people embrace the term "mixology," because see, bartenders that deem themselves mixologists have a better excuse to be rude (or something): "I'm not saying its [sic] right, but at least with mixologists at cocktail bars I have a better chance of getting a good drink, effrontery aside. What excuse do you have if you're just some boorish bar-waiter, barren of talent, woefully lacking experience and devoid of compassion, with no inkling of humility in the face of someone turning over his or her hard-won money to you?" Maybe all bartenders should just be, you know, nice. [The Atlantic]