Have a juicy tidbit for EaterWire? Drop it in the tipjar, please. 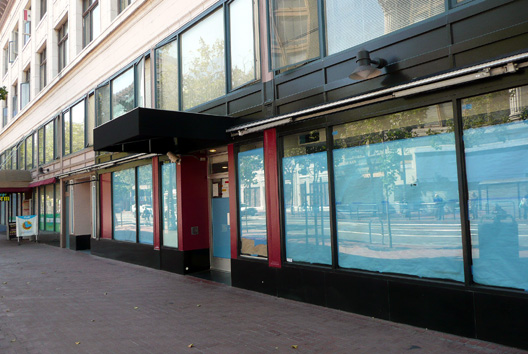 Live from the corner of Market and Taylor.

MARKET STREET—Despite buzz that it was debuting today, Showdogs is not yet open. The hot dog joint from the Foreign Cinema Team at 1020 Market hit a snag or two and says that it will be fully open by Monday ... at the latest. [EaterWire]

THE MISSION—More lineup details have been released regarding August 22nd's SF Street Food Festival. Vendors are still being added daily, but the early menu includes the following: BBQ oysters from Poleng Lounge; huaraches from El Huarache Loco; vegetarian buns from Heaven’s Dog, ceviche from La Mar, calzones from Pizzeria Delfina, "Moroccan delights" from Aziza, hot dogs from Absinthe and more. Nothing will cost over $8. [EaterWire]

THE MISSION—Per the Weekly, some beer float action will go down this Sunday at Shotwell's with some help from Humphry Slocombe. Head on over there for the Double Chocolate Stout details. [SFW]