Share All sharing options for: The Shutter: Chapeau Closes, Moves to Clementine Space

Spot a recent closure in your neighborhood for The Shutter? Drop us a line. 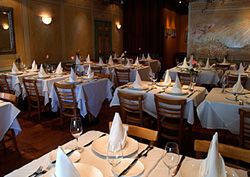 The Richmond: As noted earlier, the weekend saw the finales of both Pres a Vi and the Sunset's Pomodoro, but over in the Richmond, a switcheroo also went down. The original Chapeau on 1408 Clement (between 15th and 16th) is now closed, much to the chagrin of its army of regulars. However, chef/owner Philippe Gardelle has moved his Chapeau concept, name and staff up the street to Clementine at 126 Clement (between Second and Third), which he took over last February. As for the original, currently-dark Chapeau space, there are already rumblings that Gardelle is considering opening a wine bar there later this year. So, Clementine is now officially Chapeau. Everyone got that?
· Eater Archives: The New Clementine and Its Menu [~ESF~]