Notice a new opening on your block for The Dish? The tip jar awaits. 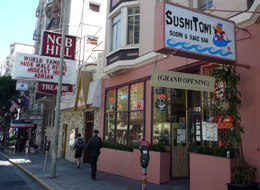 1) Nob Hill: A new sushi joint in the former Sushi Man space opened up last week. It's called Sushi Toni and serves a standard sushi-centric menu, but the best part is clearly the sign that features a cartoon man riding atop a cartoon fish. 731 Bush Street, between Powell and Mason; (415) 986-8664 [EaterWire]

2) San Mateo: The jury's still out on whether Dollie Marie's will give the Peninsula a decent restaurant, but it's certainly an interesting concept. Opening tonight, it's a white-tablecloth, Southern-inspired restaurant by Gator Thompson with only two menu options: a $38 three-courser and a $49 four-courser (sample .pdf menu here). There are only 20 seats in the place, and it's reservations only. Very curious, no? 1602 S El Camino Real, San Mateo; (650) 638-9238; website [EaterWire]

3) SoMa: The little Italian deli around the corner from the ballpark made its debut yesterday. Called D'Urso, it's serving up sandwiches ($5-$10) and similar deli fare. The Weekly touched on more details last month. 236 Townsend Street, between Third and Fourth; (415) 369-9442 [EaterWire]

4) SoMa: A new crepe stand by the name of Creperie Saint Germain is churning out " healthlicious" crepes during early mornings and late nights (until 4am on weekends) next to Temple. Also, "healthlicious" should not be used as a word. 546 Howard Street, at First, (415) 948-7348. website [EaterWire]

5) West Portal: In the land that San Francisco forgot, another Clay Oven is up and running in the old, um, Old Krakow space. By our count, it's the fourth location for the Indian restaurant. 385 West Portal Avenue, near 15th Avenue, (415) 731-2400; website [EaterWire]