Share All sharing options for: EaterWire: Bar Tartine Countdown, Action in the Marina

Have a hot item for EaterWire? Toss it in the tip jar, please. 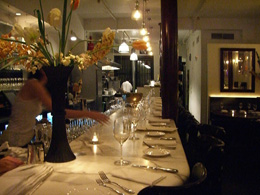 THE MISSION—As the Chris Kronner era looms at Bar Tartine, SF Mag's Scott Hocker points out that there are only a few nights left to sample Jason Fox's unique cooking before the chef switch goes down. The last day of his menu is this upcoming Saturday. [EaterWire]

THE WORLD OF SCIENCE—Everyone knows that fast food makes you fat, but as it turns out, fast food actually makes you stupid too. This actually explains a lot. [The Awl]

THE MARINA—An unnamed, soon-to-open restaurant in the Marina is looking for a head chef. It's described as a "contemporary take on a classic American bar & grill" and will include "one of the largest" American craft beer lists in the cit. Might Bin38's Jones takeover be ready in a month? [CL]

UNION SQUARE—For the rest of August, all diners who show their Julie & Julia ticket stub at Grand Cafe will get Beouf Bourguignon for half-price, $13.50. Suffice to say, eating traditional French food at a French brasserie is much better than the Hawaiian option. [EaterWire]

LISTICLES—GQ has released its list of the ten best food trucks in the country, and somehow, Spencer on the Go is the local representative, for this dubious reason: "You can snack vigorously for less than ten bucks or enjoy a three-course meal for about $25." [GQ]