To welcome back the real Top Chef, we turn to New York City comedian Max Silvestri, who will be here every week to take us through the glory of season six. His words follow: 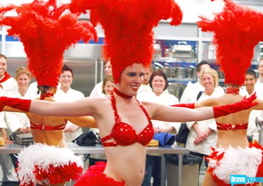 Top Chef is back! Or at least the REAL Top Chef is back. Top Chef Masters is obviously baloney, or at least I imagine it is because I didn't watch it. Kelly Choi? It's crazy how much she is not Padma. And you couldn't pay me enough money (you could) to choose to sit and listen to Rick Bayless and Michael Chiarello talk at each other. Who won? I have no idea.

This season of Top Chef finds everybody in Vegas, or Sin City, or the Place That Will Soon Sink Back Into the Dessert. I wonder if this season will be filled with constant heavy handed references to gambling, decadence, and things happening that shouldn't leave but instead should stay in said place? Yes, a lot? Great.

Seventeen of the country's best chefs have gathered to see who is the best at winning a television show. The theme of this year's contestants? Ink, apparently, and lots of it. I counted like twelve sleeve tats! One of the Jennifers has a chest tattoo that says "Scarred!" I hope to gosh she got that right before the taping started in honor of Padma's arm. Meanwhile, there are so many James Beard nominees this season. Kevin is the Beardiest, though. What a Beard! I do not know if Kevin is gay, but I get the feeling he calls a big hug with both arms that picks the other person up a "regular hug." Do you get what I'm saying?

Another Beard nominee is Bryan, who is the brother of another chef on the show, Michael! That is nuts! What a (boring) curveball. That is like when on Real World Seattle they had David and Nathan, two friends from VMI. Right? Maybe Michael will be like David and start dating a producer on Top Chef and having liaisons with her in the cab of her truck and yelling "I love you so fucking much! You're like a glass menagerie!" in a really dirty Boston accent. Bryan, if you missed it, is the more conservative of the two brothers. Michael lets us know that he's not like that at all, and you can tell by his backwards fitted baseball cap. He is basically the Lyndon LaRouche of heads. (What a good metaphor.)

The first Quickfire of the year is a mise en place relay challenge, where each team will have to prep "Vegas" items such as clams, prawns, lobsters, chops, body glitter, Criss Angel, pawn shops, and men who wear rings. Who will be the fastest? First, let's welcome everybody to Vegas with the Stardust Showgirls in a moment that will be awkward for no one.

Preeti has a super hard time opening clams. She thinks they are like opening oysters but man she is wrong. One of the Jennifers puts it best when she says, "the hardest part about shucking clams is knowing how to do it." Oh man, so true. That is definitely a statement particular to shucking clams.

Mike aka Ed Hardy On Purpose aka Frontrunner for My Favorite Contestant Already gets nervous when a female competitor keeps up with him. "A girl shouldn't be at the same level I am!" You mean in the Jon Gosselin fan club? Because I agree. Later in the show he says "stoked" and I was stoked to hear that.

The team with Bryan on it wins the Quickfire, but there's more. There will now be an unprecedented cook-off to decide who wins the $15,000 Poker Chip, but Robin, who randomly won immunity for the day when she drew the Gold Poker Chip instead of one of the four other colors of Poker Chips at the beginning, can trade in her Gold Immunity Poker Chip if she wants a chance at that other Poker Chip. Ugh, what? These rules are ridiculous. Remember when Wesley Snipes in Passenger 57 said "Always Bet on Black" and then kicked everyone? I wish he was around to do that now.

Everyone on the winning team prepares a dish with their relay ingredient. All the food looks pretty good. Nice work team. Jennifer Carroll, the other Jennifer, wins even though she keeps pronouncing "ceviche" like "Sa-VEECH," which might be right somewhere but sounds to me like a high schooler saying "This din will totes have cevich'."

In this week's Elimination Challenge, each chef must prepare a dish based on one of their vices. What? Huh? Oh right, this is Vegas. This challenge is more like each chef must prepare a dish they've been cooking for years and then concoct a really ridiculous backstory to explain what it has to do with their vices. "My vice is really fresh ingredients tailored to please the palates of the judges' table, so my dish is definitely inspired by that." Also, these are chefs. If they were being honest their dishes would be Speedy Cocaine with a side of Not Having Health Insurance. Instead it's a lot of booze and fatty foods. Except for Eve, who I think said her vice was wishing she was easy going, or something? Hah. This Is Why You're Boring.

Ron is so real and his vice puts everybody to shame. He's not really sure what a vice is but who cares. Eli's all "when I eat scallops I just want to dance!" and Ron says, "My vice is all the fish I ate in the hold of the ship that took 26 days to get me to America from Haiti." Yahtzee! I want to see him knock the seitan out of Jennifer's hands.

At the Judges' Table, Wolfgang Puck is in a rare mood. He throws a donut across the room and calls purees baby food. Tom is giggling like a school girl. Ron, Mike, Kevin and Jennifer are the winners in their prospective groups, but Beardo Kevin wins it. I am already rooting for this guy. Eve, Hector, Jen and Jesse are on the bottom. Jesse is crying for the second time this episode. She is not formally trained, and apparently you don't develop a thick skin working at "Abacrombie Fine Foods", which I really hope has something to do with terrible cologne, cargo shorts, and shirtless teenage boys. But Jennifer's miserable looking chille rellenos are the first loser. She has a fiery temper and wanted to stand out! So brave. You are bold and not afraid to make a gross protein. I am happy with this choice, mostly because now there is only one Jennifer left and that makes my job easier.
—Max Silvestri