Have a hot item for EaterWire? Operators are standing by. 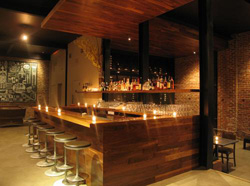 UNION SQUARE—The guys at Rye have brought on a pair of well-known, acclaimed bartenders to work weeknights: Marco Dionysos (last seen at Clock Bar) will be there Tuesdays and Wednesdays, while Carlos Yturria (last at Bacar, now at Plant too) will be there Thursdays. [EaterWire]

SEBASTOPOL—Lots of restaurant action up north has taken place this week, and now the PressDem reports that Cafe Saint Rose is officially doneski, thanks to "a mound of debt that 'was just overwhelming.'" [PD]

NORTH BEACH—Mattin Noblia—aka the Little Prince—has not taken off his signature red neck ornament on Top Chef yet, and now he's selling the scarves at Iluna Basque. And for charity! [Twitter]