Share All sharing options for: EaterWire: Mayes to Have DJs, Robbers Sentenced, More!

Have a tidbit fit for EaterWire? Operators are working weekends. 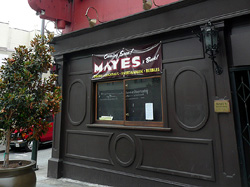 POLK GULCH—Not only will the reborn Mayes Oyster House feature sashimi and miso glazes (see the menu), but there's going to be a DJ involved three times a week too. Just like things were in 1867 when it first opened. [CL, previously]

OAKLAND—To file under "Just Desserts": the ringleader of last year's long string of brazen takeover restaurant robberies was sentenced to over 19 years in prison. [CCT]

WINE COUNTRY—Despite some resistance from struggling restaurateurs in the area, the town of St. Helena has approved a new 60-seat wine lounge called Vinu. Its naysayers argued that it would cut into a neighboring restaurants' business, but the city council decided the concept is unique enough that it might even be a boon. Vinu will only serve Napa wines and a small, ten-item food menu. [SHS]