In advance of the October 4 premiere of The Next Iron Chef on the Food Network (9pm), Eater is staging an elimination tournament with the chefs to determine the best food city. Two chefs a day tell us why their city is tops—and your vote determines which city moves on. Here now, in the final first round matchup, Eric Greenspan talks up Los Angeles, and Nate Appleman praises San Francisco. 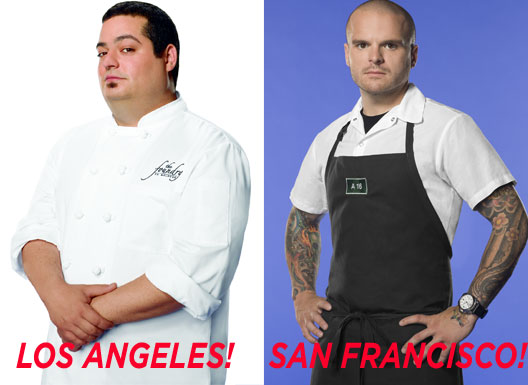 Which city is home in your chef's heart? Ideally, it's the city you grew up in.
EG: Los Angeles.
NA: San Francisco.

What's the first and most essential restaurant stop when you return to that city?
EG: In N' Out. Double double. Animal fries. Enough said.
NA: Spices Szechuan cuisine.

What are three other great places in the city that you recommend to friends or visitors, with a few quick words about why?
EG: Langers for the pastrami, dim sum in the San Gabriel Valley for the freshest, non-greasy dim sum in America Ocean Star, Sushi Nozawa for the best sushi in a town built on sushi. Nobody buys fish before the old man does. So tender you don’t need teeth.
NA: Aziza—Chef Mourad Lahlou cooks some of the most unique Moroccan food with a California organic sensability. Lers Ros—the neighborhood may be a bit rough but its Thai food like you have never experienced Thai food before. And Arguello Market—home of the world famous turkey sandwich. It lives up to the reputation.

What's the dish that represents that city the best?
EG: Tacos. Soft and hard, spicy and mild, Oaxcan or mobile Korean—the staple of the city.
NA: Anything with Dungeness crab.