As always, the tipline will remain very much open throughout the long weekend. See you Tuesday, bright and early. 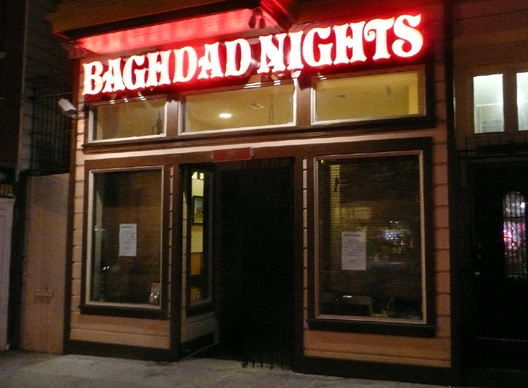 LOWER HAIGHT—Baghdad Nights, the city's lone Iraqi restaurant, will sadly call it quits at the end of the month. The place had a loyal following who tried its best to rally the troops, but the eatery has been struggling for a while now. Sources at the restaurant say there's a chance that they might reopen in another location in six months or so, but come October, moving into the Haight Street space will be a sushi restaurant. [EaterWire]

SOMA—Right down the block from the ballpark, a new froyo shop called Blush will make its debut tomorrow, and as is the norm with frozen yogurt mongers, there are freebies involved. And pretty serious ones too: Metreon tickets, iPhones, iTunes gift cards. and Warriors/49ers tickets. [FYG]

OAKLAND—For the first time in 50 years, Oakland has itself a brewery. The Linden Street Brewery opened earlier this summer and expects to increase its "steam" beer production to 5,000 barrels in the coming year. According to the article, a "handful of local bars and restaurants" are serving the brewery's suds, but only the Trappist is named. Anyone know the other venues? [Chron]