So many openings, so little time. If we missed one, let us know. 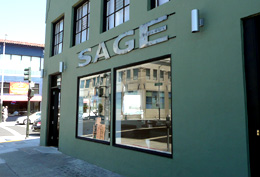 1) SoMa: After a few delays, Sage Lounge finally opened this morning at 6am sharp. In the old SoMa Coffee location on 12th and Howard, the sleek-looking Sage is offering Lavazza coffee from fancy espresso machines (among other items) and will stay open until 10pm. 1601 Howard Street, at 12th; (415) 552-7243; website [EaterWire]

2) The Mission: The long weekend saw the debut of Pauline's Wine Bar, right around the alley corner from the pizzeria proper. The new wine bar will only be open Thursday, Friday and Saturday evenings, and will offer the usual wine bar small plates, albeit with ingredients—and red wine!—from the Pauline's gardens. 260 Valencia Street, between 14th and Duboce; (415) 552-2050; website [EaterWire]

3) Financial District: A somewhat completely odd eatery called Hi-Tea has opened, much to the puzzlement of some. The Appeal has a rather brilliant take on the newcomer ("Despite or because of its weirdness, I visited three times in their first week"), and pretty much tells you everything you need to know. Gelato, bubble tea, pho, tuna heaven, all together now. 110 Bush Street, between Battery and Sansome [EaterWire]

4) Financial District Bonus: A downtown passerby sends along word of a new Japanese sweets shop called Minamoto Kitchoan. Even better, according to an eloquent Yelper, it is "probably 10 times more japaneezy than most stores in japan town." 648 Market Street, between New Montgomery and Third [EaterWire]

5) Oakland: In the short-lived Mono space right off Jack London Square, Chop Bar opened for take-out late last week, and today, Chris Pastena (also of Coda in the Mission) and company are rolling out the dining area too. Eventually, they'll serve breakfast, lunch and dinner. And there's one of those wine-tap machines involved too. 247 Fourth Street, at Alice; (510) 834-2467; website [EaterWire]

6) Berkeley: Elsewhere in the East Bay, Chowhounds note that Chocolatier Blue has already opened in the former Sketch space, and is serving ice cream, pastries and such. 1809 Fourth Street, between Virginia and Hearst; website [CH]

7) Napa: In the Oxbow Market, today is opening day for the Pica Pica Beverage Bar. With items like traditional South American bar foods and drinks (fruit juice, cocktails and sangria), the Beverage Bar is connected to its parent/neighbor Pica Pica Maize Kitchen, one of the only Venezuelan joints to be found in Northern California. 610 First Street, in the Oxbow Market;? (707) 251-3757?; website [NVR]

8) Froyo Wars: Last but certainly not least, two more chain froyo shops opened over the holiday: Nubi in the outer reaches of the Sunset and Blush, right down the street from the ballpark. We'll refer you to Froyo Gal for more details. Nubi: Lakeshore Plaza, 1511 Sloat Blvd, website; Blush: 219 King Street, between Third and Fourth, website [EaterWire]