October, also known as Oktober, is upon us, signaling the passage of Oktoberfest and her many steins, sauerkrauts and suspenders. Lets take a moment to cheers the handful of restaurants that've jumped on the bandwagon this year. And hey, if you know of anything else along these lines, now's your chance to share the wealth. 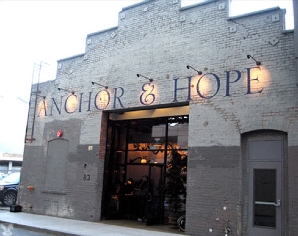 SOMA - Anchor & Hope is hosting its first celebration of this blessed holiday on October 7th from 5 p.m. to 10:30 p.m. German beer, curryweiss, oyster gratin and all manner of appropriate fare will be served as Bavarian dancers shake it and some attendees show up in lederhosen. If this is anything like the Mardi Gras shin dig at sister restaurant Town Hall, it shouldn't disappoint. Advance tickets are $40. [EaterWire]

THE MISSION - Foreign Cinema will add German beer, wine and a featured entree like grilled bockwurst and pork belly to the menu on Thursdays through October. [EaterWire]

BERKELEY - Amanda's in Berkeley is hosting an hour-long organic beer seminar at 2 p.m. on October 2nd. including a pairing with various menu items. There will also be some sort of Bison Brewing Beer special until 5 p.m. [EaterWire]

SUNSET - Brewmaster and Social Kitchen and Brewery owner Rich Higgins has put together a celebration on Thursday, October 7 starting at 6 p.m. where $25 can be exchanged for five beers and unlimited quantities of German foods like sausage, obaster cheese spread, housemade beer mustard and salads. Rich tells us more information can be found on the Web site. [EaterWire]