Share All sharing options for: 25 Lusk, Arizmendi, Jones and More!

Openings continued to run rampant this past week. Here's a rundown of the happenings, including a hearty welcome to the second location of Chilli Cha Cha on 24th Street. Be a lamb and drop early reports on all of the below in the tip jar. 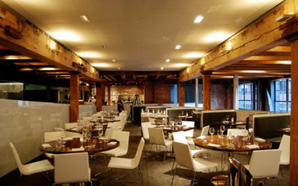 SOUTH BEACH - An insider media party ripped through 25 Lusk last night. Now they have a day off to recover and ready themselves for the grand opening tomorrow night. [EaterWire]

TENDERLOIN - Jones will finally open tonight -- for real this time -- as promised. You can catch the cocktail menu on GrubStreet. Remember food won't be available until November 1. Options for outdoor consumption are shaping up nicely now aren't they? [EaterWire, GrubStreet]

THE MISSION - Arizmendi Bakery had quite the opening day on Wednesday. The chocolate thing came out of the gate strong and passers by had to pay in lieu of accepting freebies. [EaterWire]

THE MISSION EXTRA - Double Dutch bar reopens tonight with a refreshed interior and new graffiti art. If you bring in a boom box between now and December 1st, you'll get a voucher for 10 free drinks. [EaterWire]

NORTH BEACH - Filed under temporary, chef owner Joe Manzare moved rustic Italian pop-up BeeBo into his shuttered Joey & Eddie's restaurant . He's waiting for the final decision between two contenders for the space. We know one is Original Joe's and the other has been left up to speculation. [EaterWire]

NAPA - Meanwhile at Oxbow Market, the Neapolitan pizza epidemic continues to rage through the Bay Area at an alarming pace. The opening of Ca' Momi Enoteca and Pizzeria has cornered a formerly pizza-free zone, and there's really no telling hat will put all this to a stop. [EaterWire]