Food writer and Chinatown/North Beach tour leader GraceAnn Walden now has an email newsletter called the Yummy report that she uses to voice her opinions and review restaurants since she's not writing for the Chron anymore. In last week's edition, before getting into her usual restaurant reviews, she airs some grievances with Tanya Henry's review of Hilltop 1892, a recently reopened institution in Walden's hometown Novato. Now in this week's letter she explains what ensued thereafter:

Speaking of the IJ, in the last issue I ranted about the Hilltop 1892 review by their restaurant reviewer criticizing a bad review written after only one visit, pointing out errors she made in the ingredients and railing against her including her kid's assessment of the food. I didn't name her. She wrote me criticizing me and tried to correct what she said I had wrong. That's when the flit hit the shan.

I am reprinting her email to me and my reply. We won't be double dating real soon.

I think it is unfair to slam a restaurant based on one visit, although most of the public would only give a place only one chance to satisfy...

The Marin IJ reviewer, a freelancer, went one time with her husband and kid and slammed it. They consumed exactly five dishes. She said the artichokes were canned, when they NEVER use canned artichokes. [Chef] Harris subsequently told me about all the 'product' he dumped when he took over the kitchen: soup base, mixes, and canned vegetables.

She slammed his cauliflower sidedish, which I liked so much I ran the recipe in Yummy. I spoke with the Chef Harris and he remembers them. He cooked her fish personally and it was not overcooked.

And finally, when I read her restaurant review, I don't give a fig what her kid thinks about the food. I'm looking for experience; we are not all equal, even though we all eat.

Rant over. Here are my reviews.

It gets better. In this week's edition of Yummy, she explains the "restaurant critic cat fight" that ensued over the past week, starting with an angry note from Marin IJ reviewer, Tanya Henry:

With all due respect, you don't know how many times I had been to Hilltop. You don't know if I'm a freelancer or not, and of course you are defensive about Novato restaurants because you are a consultant for restaurants there (actually I am a consultant for the City) and you live there. For your information I go twice to the restaurants I review. Unlike you, I NEVER take comps, and no one ever knows who I am. That is called integrity-kind of hard to find these days with all the noise out there.

I find it interesting that people like you who publish newsletters and blogs spend as much time as you do slamming other writers.

Number one, they knew it was you. 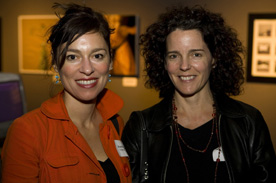 (Here is her photo from the Internet. Tanya Henry is the slim woman on the right.)

Number two, if you went more than once, where is the description of the other dishes?

Number three, you are a freelancer.

If you don't know a canned artichoke from a fresh one, you ought to stick to making PBJs for junior.

Integrity is knowing what you're talking about.

I'm printing your letter and my response.

Oh yeah, and removing you from my extensive list.
GraceAnn

And it is true, I SOMETIMES receive invitations from public relations firms and restaurateurs to try their food. I NEVER promise anything other than to show up.

I always remember the sage words of Jesse Unruh, prominent U.S. Democratic politician and the California State Treasurer, who said this about lobbyists:

"If you can't drink a lobbyist's whiskey, take his money, sleep with his women and still vote against him in the morning, you don't belong in politics."

So, agree to disagree?