Little openings fertilized patches citywide this week. Here's your chance to review them all and send us a note if there's something we've somehow overlooked. 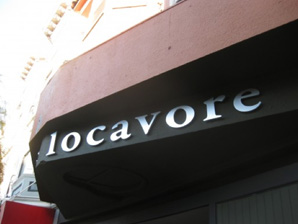 1) Bernal Heights: This week chef Jason Moniz brings San Francisco the expert kitchen skill that made Flora such a hit in Oakland. He's opened Locavore in a space (3215 Mission Street) designed by Keith Randolf, who did Bar Crudo. According to Lady Hopper, the opening menu sounds quite nice; those ingredients better be local. [Tablehopper]

2) SoMa: The Grill has opened at 799 Bryant Strett where Luna Taqueria used to be. They have hand formed-burgers, hot dogs and something called a heart attack sandwich. [Yelp via GrubStreet]

3) The Mission: We wrote about Grub a few times and now it has opened for biz. This post here has some menu copies you may wish to peruse. [Tablehopper]

4) Pacific Heights: After near-simul closings of Cassis and Neecha Thai, replacements Sweet Maple and Sweet Lime are both now open. Seriously guys, you're scaring us. What's up with that. [EaterWire, Tablehopper]

6) Pacific Heights: The replacement for Patisserie Delanghe on Fillmore Street has also arrived. Like its predecessor, Fillmore Bakeshop is a family run affair, but the pastries and baked offerings slant a bit more toward American sweets. [Tablehopper]

7)Civic Center: Last but certainly not least, MA•Velous, a design-driven, coffee- and wine-centric eatery, has opened near the intersection of Fell and Market Streets. [EaterWire]

Eater adores early reports on newcomers, so do send us your thoughts if you patronize any of the above.