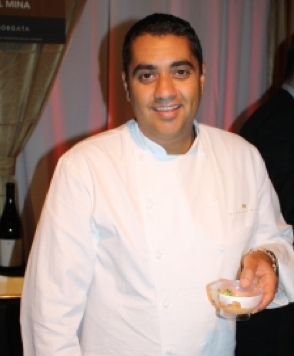 Michael Mina -- otherwise known as MICHAEL MINA on all Mina Group materials -- has announced the opening date for Bourbon Steak (BOURBON STEAK). It's happening October 7th, as in this Thursday, about three weeks after the preceding Michael Mina restaurant closed at the Westin St. Francis. CIA graduate Omri Aflalo has been named executive chef. Fresh from training at several Michelin-starred restaurants in Europe, Aflalo has also worked with Gary Danko and Michael Richard at Citronelle. Michael Dalton of Strategic Hotels, which owns the Westin, has done the design. It'll still be a bit of a work in progress when the restaurant opens for dinner service on Thursday. Carpets are being laid today so that furnishings can be brought in tomorrow and Wednesday and opening can proceed on schedule. The color palette is described as "strong and masculine" with burgundy and metallic tones.

The menu includes some themey sharable starters like potato skins "poutine" ($14) with short ribs and smoked gouda and lobster corn dogs ($16) and appetizers like Wagyu ($18) and Ahi ($19) tartares. Entrees like San Francisco Cioppino ($32) show Mina's intention to make the SF outpost feel special. As promised, the lobster pot pie (MP) is on there and there's a nod to the burger trend with a "California Style" number ($18) topped with cheddar and thousand island dressing. Look out for the butter-poached steaks starting at $42, about four seafood selections, accompaniments like foie gras ($22) and classic sides like black truffle-laced mac & cheese ($9) and jalapeno creamed corn ($9). The reso line is currently open. And remember Michael Mina restaurant will pop up again in the old Aqua locale on the 19th. Anyone expense-accounted into the room on opening night, is highly encouraged to send in feedback.