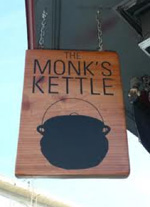 The tweets have done it again, revealing yesterday was Kevin Kroger's last night as chef at Monk's Kettle. Kroger has been with the Mission's reigning gastropub since it opened in December of 2008. According to his latest blog post, filed today, the split was amicable and twitter tells us the future remains unclear. [Twitter, TFAUC]