Share All sharing options for: Beaujolais Nouveau Release 2010: Kool-Aid Wine Gets Its Day

It's time for the next edition of The Swill, wherein certified sommelier and Hip Tastes book author, Courtney Cochran, brings you the latest gossip and findings from the wide world of wine. 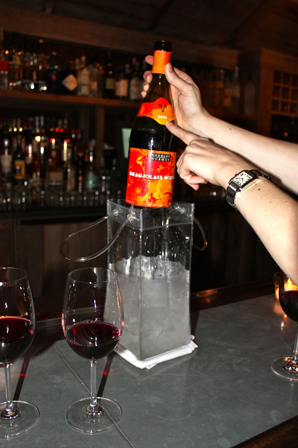 Yesterday, during the reputable annual release of France’s storied “new wine” from the disreputable region of Beaujolais, throngs of Frenchies and Francophiles gathered at Gaulic watering holes to quaff copious amounts of what’s become widely known as Kool-Aid wine. In a way, it’s the ultimate study in high (French culture) meets low (blotto culture). And it can be a damn good party.

The reason for the revelry? Well, this provincial corner of France where Beaujolais Nouveau originates has been celebrating for what feels like eons, but they've just started effectively exporting the revelry around the world. Colorfully labeled wine shipments arrive at points far and wide in November to be cracked open no sooner than 12:01 a.m. on the the third Thursday in November. This year’s release of the light red wine was heralded to be the best in years. It's best imbibed ice cold, à la kiddie beverages and dangerously drinkable; so naturally I took a crack at it last night in Napa.

It helps that some spots start the Beaj party at 10 a.m. But in Napa for the night on business, I found the town surprisingly bereft of Beaujolais celebrations; though Morimoto was hopping, I’m pleased to report. So with a bottle of Georges Duboeuf Nouveau in tow, I slunk into Angèle just before close. The staff seemed uninterested in the occasion for the most part, though they procured both a bag of watery ice to chill the stuff down and a companion Nouveau from Berkeley’s venerable French importer, Kermit Lynch. Both surpassed my expectations and incited excessive imbibing, so much so that this morning remains a bit foggy. The Lynch offering was even bordering on complex, to the point where I can happily say this year’s Beaujolais Nouveau was better than any I’ve had. The buzz was right-on! Has Kool-Aid wine grown up?

Those of you who’d like to check it out are in luck, for the parties are not over. Tonight, the French-American Chamber of Commerce will host La Soirée: The 29th Beaujolais and Beyond Festival at Metreon City View. Tomorrow will see Lynch host his annual parking lot party in Berkeley. Knowing Lynch, he’ll probably pour the Nouveau alongside Beaujolais’ better Beaujolais-Villages and Cru wines, whose complexity can approach that of Pinot Noir (Beaujolais is made from the Gamay grape). David Rosoff -- sommelier extraordinaire down South for whom I apprenticed at LA’s Campanile as few years back -- once proclaimed the Cru reds of Beaujolais “the ultimate turkey wines.” Come this turkey day, you may want to check them out.

Breaking into the Beaj at Angele in Napa. [Photo: Ashley Teplin]