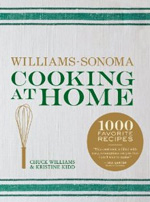 Williams-Sonoma founder and introducer of the Cuisinart to America, Chuck Williams has a new cookbook. The just-released Williams-Sonoma Cooking at Home -- a book Williams says was 18 years in the making -- binds 1000 of so of his favorite recipes for every occasion under one hard cover. Former Bon Appétit editor Kristine Kidd co-authored the tome. Check this Merc bit for the inspiring story of how Williams launched his company out of an old Sonoma hardware store in 1956. [Merc]