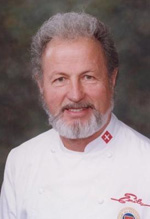 Remember when that Santa Cruz chef was arrested on suspicion of child pornography back in July? Well now another similar case comes across our radar. Chef Emile Mooser former chef owner of Emile's Restaurant was arrested in San Jose for spending nearly $400 for access to child pornography websites. Mooser pleaded "no contest," so there will not be a trial. Meanwhile the current owners of Emile's would like you to know Mooser has not been involved at the restaurant since 2007, so you should still pop in for French onion soup. [The Merc]