Merry Christmas and Happy Holidays everyone! We'll be back with plenty of juicy, juicy restaurant news on Monday. 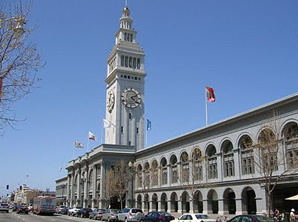 FERRY BUILDING - Charles Phan's The Slanted Door Retail Store is now open, offering "sauces, spices, teas, cookbooks, and hard-to-find Asian cooking supplies and utensils, all handpicked by Charles Phan," according to the press release. You can also get cooking kits for some of The Slanted Door's most popular dishes. Hours are 10:30 a.m. to 6 p.m. Monday through Friday, 10 a.m. to 5 p.m. Saturday and 11 a.m. to 4 p.m. on Sunday. [EaterWire]

CHRIS DALY WIRE - Earlier today, GrubStreet passed on news that San Francisco Supervisor-cum-bar owner Chris Daly secured a liquor license for the Daly's Dive Bar and Grill he failed to open earlier at the Buck Tavern (1655 Market Street). SF Appeal confirms this later, although Daly is still waiting for one signature to seal the deal, he'll have to keep the Buck Tavern name for the immediate future and he won't be able to remodel. [GrubStreet, SF Appeal]

ON THE MARKET -This Craigslist ad says Digs Bistro and its liquor license are for sale in Berkeley for a whopping $110000. Yes, that's four zeros. [Craigslist]

CHRISTMAS - Evan Rich of Coi, Louis Maldonado of Aziza and seven other good Bay Area chefs have shared their holiday cooking plans for at home meals with The Feast. Offal, prime rib and kimchi area all included. [The Feast]