Share All sharing options for: Experts Choose The Best Dining Neighborhood of 2010

As is the tradition at Eater, our closeout of the year is a survey of friends, industry types and bloggers. This year, we asked the group eight questions, from Meal of the Year to Top Standbys. Top Newcomers and Top Standbys and 2010 Summed Up In One Word have already dropped. All will be answered by the time we turn off the lights on Thursday afternoon. The answers here are in no particular order; all responses cut, pasted and unedited: 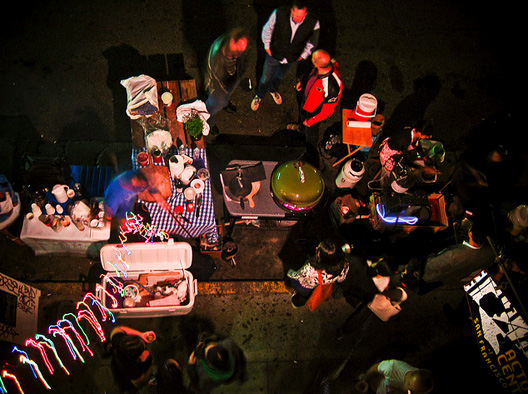 Q: What was the best dining neighborhood in San Francisco in 2010?

Stuart Schuffman, Broke-Ass Stuart: The Mission without a doubt. I feel like at least 10 restaurants opened in the past six months alone.

Karen Palmer, editor Daily Candy SF: It would have to be a tie between the Mission and SoMa. The Mission because it's always great; SoMa for an exciting slew of openings.

Virginia Miller, The Perfect Spot SF: Though the Mission consistently remains my tops for sheer volume of high quality, diverse, affordable food, SoMa has really grown into a destination dining 'hood. Whether it be superb coffee at Sightglass, Vega, Epicenter, awesome sandwiches at Deli Board or HRD Coffee Shop, Hoss' heartwarming Middle Eastern fare at Zare at Fly Trap, perfected pizza at Una Pizza Napoletana, urban chic at Prospect or RN74, comfort at Citizens Band or Brickhouse, street food like TaKorea or Spencer on the Go!, exquisite cocktails and dim sum at Heaven's Dog, SoMa offers something for every foodie.

Kevin Blum, founder SF City Dish: The Mission, the Fillmore, and Oakland. Keep your eye on Sausalito in 2011.

Josh Sens, restaurant critic, San Francisco magazine: Probably the outer edge of the Mission, along Folsom and South Van Ness, a relatively small area with a lot of activity.

Michele Mandell, publicist: The obvious answer is the Mission for its concentration and variety of options. But I'd like to give a vote to a dark horse candidate, the FiDi area. It is home to some fantastic spots: Perbacco, Barbacco, Wayfare Tavern, the new Michael Mina, Quince, Bix, Kokkari, Cotogna and Coi, just on the outskirts. Doesn't the Ferry Building qualify as the FiDi, too?

Steven Oliver, Nob Hill Gazette Taste writer, restaurant social media consultant, California sales director for Combier liquers: Since I live in the Fillmore / Pacific Heights neighborhood, it has been fantastic to see restaurants open that had outposts in other parts of town that I visited less often. SPQR, hands down Matthew Accarrino's menu is some of the finest Italian cuisine being offered in San Francisco, we are truly blessed. Other notable locations in the neighborhood: DOSA Fillmore, OTD Bush Street, Grace Nguyen does an amazing job with Charles Phans vision of the mother ship Slanted Door, Pizzeria Delfina, many thanks to Craig Stoll and Anthony Strong for a satisifying menu seven days a week that you never grow tired of ordering from. Woodhouse Fish Company, Citizen Cake, Elizabeth Falkner is now offering her sweet and savory creations, sorry Hayes Valley we have her now.

Paolo Lucchesi, San Francisco Chronicle Inside Scoop columnist: For the first time in memory, I think we've got a challenger to the Mission's restaurant supremacy with the continued rise of SoMa -- or at least, one worthy of debate. Maybe it's its sheer size, but the openings in SoMa this year were quite big: Benu, Prospect, Zero Zero, Agricole, Thermidor, Una Pizza, Marlowe, Alexander's Steakhouse and the rest. Glad to see the Financial District made some moves this year too, with Cotogna, Wayfare, Barbacco, Mina et al.

Carolyn Jung, Food Gal: South of Market because it encompasses everything from Benu to Spice Kit to Zare at Fly Trap to Alexander's Steak House to Coco500.

Katie Sweeney, editor YumSugar: The Lower Haight/Nopa! People always say the Mission is the best dining neighborhood in the city, but every neighborhood has tons to offer. Currently I'm obsessed with the Lower Haight/Nopa area. With the addition of Ragazza's pizza and Nopa's new brunch service, Divisidero really shines. It's got some stellar old standbys in the form of Bar Crudo, Tsunami Sushi, Little Star, and Nopalito. Plus, with Fly Bar, the Page and Madrone, there's a couple of unpretentious bars to sip an after-dinner drink.