Restaurant Figures Name Their Single Best Meals Of The Year

Share All sharing options for: Restaurant Figures Name Their Single Best Meals Of The Year

As is the tradition at Eater, our closeout of the year is a survey of friends, industry types and bloggers. This year, we asked the group eight questions, from Meal of the Year to Top Standbys. Top Newcomers , Top Standbys, 2010 In A Word, Best Restaurant Neighborhood and Biggest Dining Surprise dropped earlier, and now our local figures pick the best meal they had all year. The answers here are in no particular order; all responses cut, pasted and unedited: 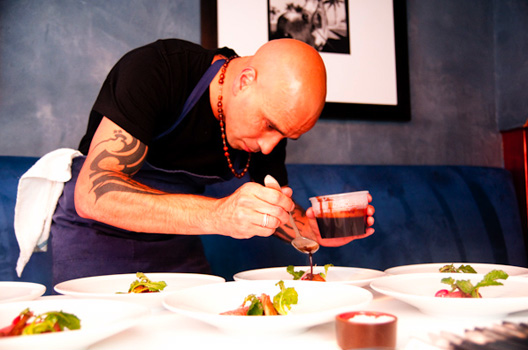 Katie Sweeney, editor YumSugar: Saison. The space is absolutely gorgeous. It's intimate, but rustic — you really feel like your transported to another place. I went for an interactive dirt tasting that was followed by an exquisite four-course meal.

Carolyn Jung, Food Gal: Dinner at the Fifth Floor, during the last week that Chef Jennie Lorenzo was there. The dishes were elegant, intense in flavor and so full of finesse -- from snapper crudo with a powerhouse tomato sorbet to a chicken wing cooked sous vide, then served with rich duck liver-mascarpone mousse. And I may never experience the likes of it again unless she starts cooking once more in the Bay Area. Let's hope so!

Paolo Lucchesi, San Francisco Chronicle Inside Scoop columnist: Aziza. Also memorable were a revelatory first meal at Ippuku, a sentimental one at A16 and a gorgeous day at Tomales Bay, surrounded by oysters and picnic tables. There are so many more to be appreciative of, too; it was a great year.

Scott Hocker, Tasting Table SF: That damn katsu kare at Minako during a going-away party the other week with a few of my favorite people. And, sweet Jesus, the meal's mushroom tempura was monstrously good, too.

Stuart Schuffman, Broke-Ass Stuart: Really? My single best meal? That’s big question, luckily I can answer that because it happened last night. Yesterday was my birthday and my lady took me to Boulevard. It was fucking stellar! And what’s great is that since our waiter could tell that we were industry people he picked up our dessert and corkage. Or maybe it was just because we’re nice and he probably has to deal with a lot of people who feel they’re entitled to act like assholes just because they’re rich.

Karen Palmer, editor Daily Candy SF: It's another tie, mostly for sentimental reasons: a marathon birthday brunch at Hog & Rocks (great oysters, great cocktails, great company), and a decadent breakfast with a good friend at the Fremont Diner (ricotta pancakes and fried chicken and gravy over a biscuit...need I say more?).

Virginia Miller, The Perfect Spot SF: With so many superb SF meals, I hate to go with LA, but Jose Andres' The Bazaar was probably my most memorable, exciting meal of the year. Baume in Palo Alto followed not far behind.

Brock Keeling, editor SFist: Eating a bacon cheeseburger with a shot of tequila and a beer at Public House as the Giants clinched the World Series.

Kevin Blum, founder SF City Dish: The Fatoush Salad at Insalata is just ridiculous. A salad should not be this good.

Michele Mandell, publicist: I'll narrow it down to two: Aziza and SPQR. Both mind-blowingly flavorful, visually appealing and full of soul.

Sara Deseran, senior editor 7x7: Well, food moves you for so many reasons, and not always because it's the ultimate meal. A classic example would be Guadalajara in May. Joe, my husband, and I were there for a Tacolicious R+D trip/fun (by marriage I'm the co-owner of Tacolicious). We were there with Eric Rubin who is behind Tres Agaves tequila here in SF and after a dinner at a rather fancy restaurant where we watched the rain pour down from the indoor/outdoor dining room—heartstopping thunder and cracks of lightening—we were headed back to our hotel when Eric told the cab to pull over suddenly. It was like 11 at night by then, and we stopped in front of Carne Garibaldi—a bit of a cult classic there. The restaurant is famous for only serving one dish: carne en sugo (beef in juice, basically), a muddy, ugly mess of delicious stew flavored with bacon. You also get warm tortillas, radishes, green onions and refried beans with corn. And of course a cold beer. It was such a relief from the stuffy dinner we'd just had and it was late and it was rainy yet warm and it was impromtu and although I could barely eat another bite, I managed to scarf a whole second dinner with gusto.

The Restaurant at Meadowood