Restaurant Experts on the Biggest Dining Surprises of 2010

Share All sharing options for: Restaurant Experts on the Biggest Dining Surprises of 2010

As is the tradition at Eater, our closeout of the year is a survey of friends, industry types and bloggers. This year, we asked the group eight questions, from Meal of the Year to Top Standbys. Top Newcomers and Top Standbys, 2010 In A Word and Best Dining Neighborhood dropped earlier, and all will be answered by the time we turn off the lights on Thursday afternoon. The answers here are in no particular order; all responses cut, pasted and unedited: 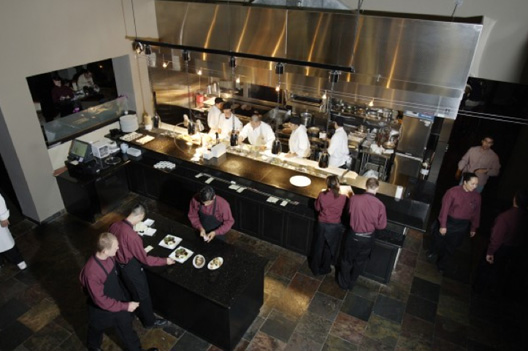 Q: What was the biggest dining surprise of 2010 in San Francisco?

Karen Palmer, editor Daily Candy SF: That not every opening was burgers, pizza, and soft serve: There are a handful of chefs who are really pushing the envelope.

Virginia Miller, The Perfect Spot SF: Certainly the volume of openings was a surprise - it was exhausting keeping up with them all. A surprise within that was the amount of high profile, upscale openings, like Benu, Michael Mina, Saison, Alexander's Steakhouse. It was nice to have those in the mix with the welcome trend towards comfort and affordability of recent years.

Kevin Blum, founder SF City Dish: Tacolicious has been my go-to spot this year. It's so simple and yet so great. They're not trying to be everything for everybody. They do one thing
and they do it great. More restaurants should follow this model. Oh yeah, and their spicy margaritas are the bomb.

Michele Mandell, publicist: The sheer abundance of openings was astounding. Knowing how hard it is to open and run a successful restaurant, I can't help but be surprised by the unbridled enthusiasm with which people keep doing it. But the optimism is inspiring. I'd like to know how many new seats were added in 2010, and how many went away.

GraceAnn Walden, The Yummy Report and SF tour guide: A 3-star chef (SF) is negotiating to open a place in Novato. In a sleepy town like this, we had 4 new restaurants open this year, all very good. Amazing. The weirdest thing I ate this year: Bull's penis soup at Quan Bai SF, Stinky tofu at Spices! SF

Steven Oliver, Nob Hill Gazette Taste writer, restaurant social media consultant, California sales director for Combier liquers: This year we saw many high profile, large format, expensive build out spaces, which would show confidence and an improvement in the economy. Unfortunately I feel we are far from seeing the end of many closures that 2011 will produce.

Carolyn Jung, Food Gal: The closure of Martini House in St. Helena. I had just enjoyed a great dinner there in this lively, packed restaurant a few months before the news was announced. It's just such a shame that a place so many people loved is no more.

Josh Sens, restaurant critic, San Francisco magazine: That Gather, a restaurant with a large amount of vegan dishes on its menu, didn't suck.

Paolo Lucchesi, San Francisco Chronicle Inside Scoop columnist: I, for one, am glad that our local chefs have phased out the faux-hawks in favor of the five-day scruff.

Sara Deseran, senior editor 7x7: I think Jeremy Fox becoming the creative director for Tyler Florence's group was pretty surprising. I'm having a hard time imagining those two having a conversation. And maybe it's not a dining surprise so much as a drinking surprise, but I'm still shocked and saddened by the Blue Bottle oust from Dolores Park. Not because I need more Third Wave coffee, but because, as an local architect once put it to me, San Francisco's "liberal" mentality has the ability to calcify good, creative business.

Scott Hocker, Tasting Table SF: That after being a regular at Minako for over five years, I only recently discovered that chef Yoko also cooks a ridiculously fine katsu kare.

Stuart Schuffman, Broke-Ass Stuart: That while the economy might be falling apart, motherfuckers still gotta eat. Restaurants keep popping up like San Franciscans all had golden parachutes.