Why Delarosa Works in the Marina

Share All sharing options for: Why Delarosa Works in the Marina

This is One Year In, a feature wherein Eater sits down for a chat with restaurateurs and chefs celebrating their one year anniversary. 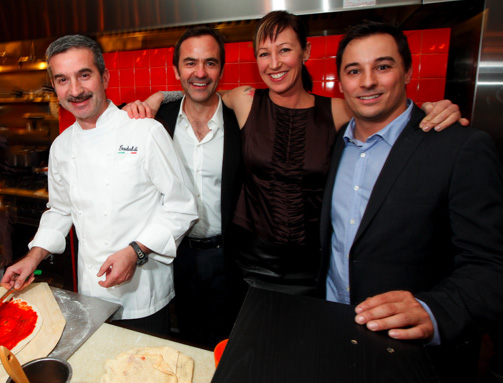 Remember for a moment, Delarosa: the youngest member of the Beretta-Starbelly family, run by chef Ruggero Gadaldi, Adriano Paganini and Deborah Blum. When it came onto the scene in the Marina about a year ago, there were big expectations due to the success and rave reviews Beretta has nabbed. And although it didn't rank as high in the Bauer star scheme, the little guy has been trucking along in the Marina and has fared quite well since opening day. Earlier this week we enjoyed the rare opportunity to sit down with all three owners and manager and once along with GM Alvin Garcia. Freshly buzzed from a tasting of eight year-end additions to the cocktail list, here's what they had to say about the year that was.

What are your reflections as you look back on your baby's first year of life here in the Marina? Have your expectations been met?

Ruggero Gadaldi: I think they've been fulfilled and more. From the moment we opened we've been rolling, rolling and we've settled into the Marina and it's been a great success since day one.

Adriano Paganini: Well yes, and in the beginning we were a bit concerned with the communal tables and how sleek and bare this place can feel, but it is comfy in a way. We obviously did this because we thought the whole communal tables and stools would set us apart, it makes us very casual. And in the beginning we did have people that said, we don't like it. And now. They do.

Deborah Blum: Yeah, you know, we're at a medium price point, and there's definitely no shortage of places at this level, but I think more than anything we're trying to bridge having really good cocktails and having interesting beers and good quality food with a really casual atmosphere and having people sit in stools at casual tables. We're twisting that price point to a bridge concept and we weren't really sure if people were going to understand it. If they were going to feel comfortable. You know it's a pretty small room and we've got this bar and there's a lot of things we're trying to hit upon. But you know we're busy during the middle of the day. We've got women coming in with strollers. Then at night we've got people on dates, we've got folks coming in for late night and it works!

Alvin Garcia: Yeah I think people have really learned how to use the restaurant. People can come in and have one antipasti during the day or have a full dinner with a party of 12 before a big night out in the neighborhood.

So it's always interesting to reflect on things that've worked and haven't worked. What stands out?

AP: The outside seating was something that did well more than we expected. It didn't just create additional seats, but it created additional energy. We got much busier when we added the seats outside. Obviously especially summer, but it's amazing how people will sit out there on a Saturday even now with the heaters on.

DB: Yeah people would walk by and not notice we were here in the beginning. And then when the outside seating was added they started to notice. We were also initially shocked by the amount of strollers coming in here during the day. And the space has always been a challenge especially when managing that. But it's a challenge that our staff deals with extremely well.

I'm also interesting to know what the biggest differences are when running similar concepts in the Marina, the Mission and the Castro. What do you have to tweak for these different audiences.

DB: Well from the start, we knew this was going to be a lunch and dinner place, which is different from Beretta. I think it was Josh Sens who called us the Armani of cafeterias. AP: No, [laughing] it was the D&G

Well there is a big difference.

DB: One thing we definitely noticed and thought about quite a bit is how people in the Marina would accept the cocktail program and whether or not they would get it and whether or not there were enough things on the menu that would appeal to them. And we sort of expected a lot of kick back from it, when in fact they were pretty open to it. You know, introducing people to new spirits. There are people that come in and they want vodka. Well gin is essentially a vodka that's been flavored with herbs. When people try the cocktails and taste the quality of them, they were really receptive and open. So that was sort of a nice surprise. That's great.

AG: I think that's one thing that's very different between here and Beretta. You know at Beretta, people go in and they're looking for a cocktail. Whereas here a lot people come in and they put their eyes down and they say "can I get a vodka soda," like a Grey Goose soda. And here, the thing is, we've got one vodka and it's, you know it's rye vodka, and it's really tough for people to come into something when they don't understand it. Everyone else on the block does vodka and sodas and Jack and cokes and it's a little more of an education here. But people are willing to listen. Generally we'll pour tastes. So it's not what's better or worst, it's just what we do. And it's very different here.

DB: At Beretta we get a lot of regular people and a lot of industry people people that know deeply about wine and spirits. Here people come in to eat and they say oh, look, they have a bar, maybe I'll have this. The cocktail program is this unexpected bonus.

Now Bauer. Always a fun subject. How do you feel about the two star review. Why do you think he gave you less star love here than at Beretta and Delarosa?

So it didn't it really affect anything?

DB: I think reviews are important, but they're not the be all end all. You know it wasn't really a negative for us. I think what's more important is what people say and give feedback on every day.

And are you mostly working with people that live in the neighborhood here? Or do you get a good amount of destination diners?

Looking back at last year. What are your goals for growth at Delarosa?

AP: I have some ideas that I want to do, but what is necessary isn't necessarily fun. It's easy to be exciting when you're new, but what's hard to do in any business is keeping going, keeping great. Because you are starting over every single day. You need to stick with the plan. You have to have good food, good service and not fall into boredom and mediocrity, which is often the case when you have several successful locations. Because you tend to forget why you got there to start with. Our focus now as a group is to become classics. Places that are going to be around for the next 10 to 20 years vs. the next five years. Maybe we got the concept right. Now it's about the execution on a day-to-day basis. If we do that right, I do think the concept here at Delrosa is exciting enough as is. I mean I live on the other side of town. I live by Beretta. And I like to come here. I think it's a fun place to be.

DB: One thing in the next year that we really want to focus on is becoming more of a presence in the cocktail world in the city and being one of the restaurants on the forefront of that.

AP: We do have a new cocktail list coming out in the next two weeks with seasonal changes. Another thing we want to do here that's been very successful at Beretta is the guest bartender program. We get bartenders from reputable bars from NY and LA and they come in. Do you know when you're going to start? Probably next year.

Last question. What are everyone's favorite go-to spots in the city on a night off?

DB: There's a restaurant in the Mission called Heirloom I like very much because it's very humble. I think the wine list is amazing. The guy who owns it, Matt, has been working in wine for over a decade and has these really great, old California wines. There's something like if you bring in a wine that's older than 2002, they don't charge you corkage. It just encourages people to really enjoy the wines. Every time I have a dinner there it's so simple, but good and they're really nice. It's completely transparent. The dishwasher's right there. And I find it really refreshing. I also like Alembic because you can get a good cocktail and a couple small plates and it reminds me a lot of Beretta.

AP: For me there are always so many new restaurants and I'm going to new places a lot, but I do go to Bar Agricole often because I know those guys and they're friends.

AG: On a true day off it's like Philz in the morning. I gotta have a sub at Molinari's. You gotta have oysters at Bix. Vesuvio's a beer. I also go back to Sodini's in North Beach a lot.