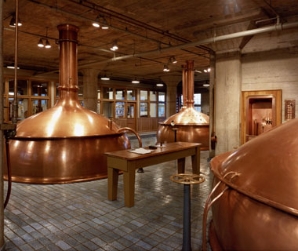 Today Anchor Brewery announces it sold out to the Novato-based Griffin Group, whose key members were instrumental in the creation of Skyy Vodka. As with other local darlings that have merged with the big boys, such as Scharffen Berger and Niman Ranch, representatives allege they will be working with company founders to maintain the integrity of the brand. But we all know promises of this ilk often don't pan out as "expected." Anchor Brewery has been credited as a great influencer in starting the craft beer movement in the U.S., so we can only hope Griffin will preserve the institution's history and headquarters in the Bay Area. [Inc]

SF FOOD WARS - From the genius innovators who brought you Mac n' Cheese Battle, Mini Cupcake Clash, and The [Chocolate Cookie] Situation, comes Amuse Brunch! (brunch in a bite) a novel food contest guaranteed to make judges heave once again. Those brave enough to release their "brunchlings and brunchlettes" to the public, should email heyyou@sffoodwars.com or go here for more information. The contest happens at the Thirsty Bear Brewery on May 16th. [EaterWire]