Due to Yates Lawsuit, Chile Lindo Returns To Basket Vending

Share All sharing options for: Due to Yates Lawsuit, Chile Lindo Returns To Basket Vending

When we posted about the over 30 lawsuits Craig Yates has filed this year against food and beverage businesses in violation of the Americans w/ Disabilities Act (ADA), some vociferous commenters came out in his defense. Yates has continued to patronize some of the businesses he's sued, such as Chile Lindo where he returned for empanadas. And now SFoodie reports Chile Lindo owner Paula Tejeda -- who the neighborhood affectionately dubbed "The Girl from Empanada" when she started selling out of a basket around the Mission in 2008 -- has decided to cease selling inside the store so her landlord won't potentially cough up $1,000 every time Yates is denied entry. Instead Tejeda will continue selling from a basket outside at 2944 16th St, where she notes a new awning will be erected today: the finishing touch on her Jan. 4th grand re-opening. Tejeda's business currently employs four people who she says rely on their income to support families, so she won't cease operation entirely.

We asked Tejeda if she considered putting up a ramp to comply with ADA guidelines. But she mentioned the danger it would pose to passers-by and the uncertain legality of building out onto the sidewalk and altering the storefront of the space, which is a historical landmark. Tejeda feels she's struggled long enough. She operated the Chile Lindo kitchen with her husband from 1995 to 2000, then closed the doors to go back to school when her marriage split up. After taking classes at City College for a few years, she received a scholarship to Mills College, where she graduated with a 4.0 in 2008. She then enrolled at the Renaissance Entrepreneurship Center in SoMa to get off the ground again. It was a big step when she reacquired the kitchen space she formerly owned on 16th street and then converted it into an actual walk-in empanada vendor earlier this year. So Tejeda is heated up when expressing Yates is an "absolute moron" who is killing the "hard-working, decent people" who own small businesses. "When will we stop?" she asks. But the law is the law. And as she and others have learned, you can't argue with that. For what it's worth, here's the letter Tejeda posted on her window yesterday to inform customers of the news: 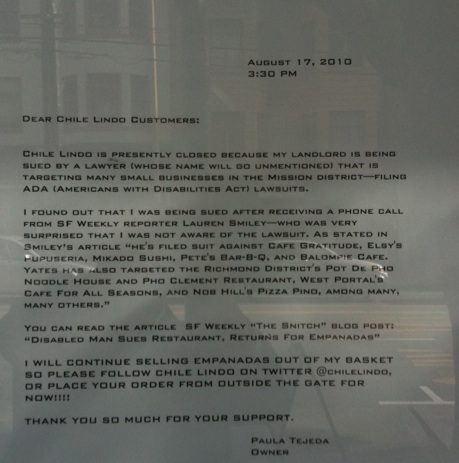