Liza Shaw Talks A16 Tokyo: Budino and the Japanese Bauer

Share All sharing options for: Liza Shaw Talks A16 Tokyo: Budino and the Japanese Bauer

This is One Year In, a feature in which Eater sits down for a chat with restaurateurs and/or chefs celebrating their one year anniversary. 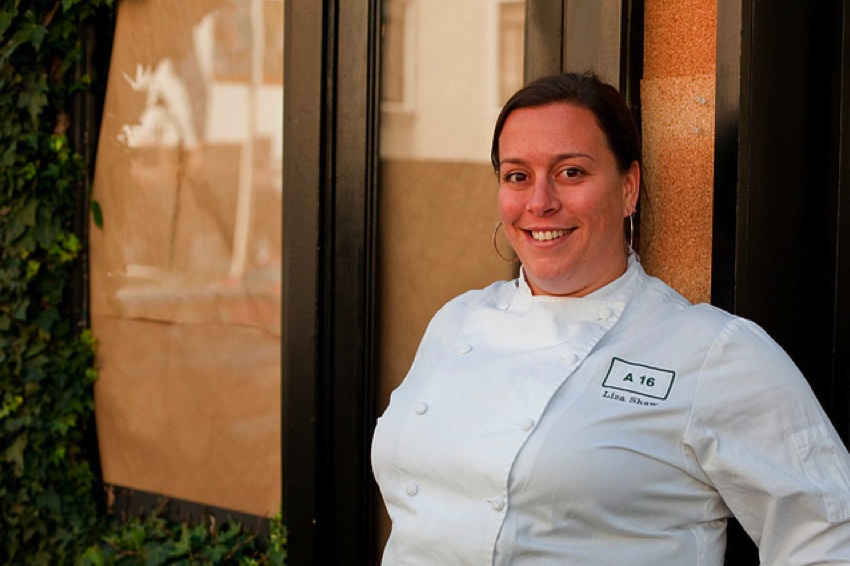 Liza Shaw outside A16 in the Marina, currently experiencing a mini-shutter. [Photo: Naseema Khan]
A16 made a surprising move last year when they opened an outpost in Mitsubishi's Marunouchi Park Building in Tokyo. Born out of a partnership with Japanese restaurant corporation Giraud, the Japanese version of our beloved Italian mainstay has hit its fair share of challenges in the first year of business. Top quality cheese costs twice as much in Japan as it does in California, for example. Here we sit down with A16 chef Liza Shaw, who was asked to create the Tokyo menu just months after she took over for Nate Appleman at A16 here in the Marina. Almost exactly one year after she eagerly stepped up to the plate, Shaw reflects on training the Japanese to eat cavatelli, facing the food critics of Tokyo, future plans and why someone really needs to open a burrito joint over there.

So, one year in. Have your expectations been met? Met and exceeded, absolutely. We had a pretty good idea about the success potential of the project, but I would say that we had some trepidation going into it, expanding our brand for the first time in a new country with a new audience. They have welcomed us with open arms and hungry appetites.

Menu-wise, there were probably some surprises with the Tokyo audience. What's worked? What hasn't? The cost of ingredients is definitely an issue at A16 Tokyo. Here in SF, we are used to having a whole world of local, organic produce, as well as easy access to specialty imported ingredients. There, it isn't always possible to get the same things in season domestically, or to import the same brands we are used to from Italy, etc. We have had to make a few sacrifices and adjustments to accommodate for availability and cost effectiveness. We have made some allowances for exciting Japanese ingredients like shiso and myoga that definitely wouldn't fly on the menu here, but make perfect sense within our aesthetic and style over there. Very generally speaking, the menu there skews a little heavier on the seafood and lighter on the meat. Whole animal butchery can't be a focus there as it is here, but that's mainly for storage reasons. They have no walk-in. As far as pastas go, we have learned that the Japanese have a particular fondness for spaghetti and long noodles, and we have had to train them to appreciate shorter pastas like cavatelli and paccheri that are such an important part of Southern Italian cuisine and carry certain sauces well. Entrees don't sell all that well. Whereas here in SF, we will sell 20 of an entree in a night, there they will do the same amount of covers and sell only four or five.

What was your initial reaction when A16 partners Victoria Libin and Shelley Lindgren asked you to head up the Tokyo project? How much time do you spend over there? I have always felt a certain draw towards Japan, so it was a natural fit and an incredible opportunity. Formally taking over the kitchen here in SF and opening a restaurant in Tokyo in the same few months was definitely a tall order, but I dove in head first and have not looked back. I will have gone to Tokyo three times in this first year. We worked out a system where we are starting to do exchanges with more than just me and our chef over there. This spring, we sent our pastry chef, Lori over there for a week, and just last week, for the anniversary celebration, we sent Ross, one of my sous chefs, to implement the special anniversary menu. In February, Yasu, who is the sous over there, was here for ten days, and this summer, Tayama, the Tokyo chef, was here. It's really fun for everyone to be able to go back and forth and learn more about the seasons and the ingredients and the working styles of both kitchens, which are remarkably similar.

What's been the most pleasant surprise? Really, how well we have been able to work with our partners in Tokyo for the project. They are incredibly accommodating, generous, and trustworthy. There have been some bumps along the way, but overall it has been a real pleasure. It isn't easy to trust someone with the execution of your brand, style, menu, etc, but it has gone over really well and I think we can all agree that this will become a long and prosperous partnership.

How do diners in SF differ from their Japanese counterparts? In SF, people are generally accustomed to the ordering format of appetizer, maybe a shared mid course, entree and a shared dessert. In Tokyo, there is a particular fascination with our pizzas, so there is more of a tendency to order starters and pizzas or pastas, and ALWAYS dessert. Our desserts have been a real hit. We stay open there between lunch and dinner, because there's a fairly large afternoon crowd from the museum across the courtyard, and most of the sales at that time are desserts. The chocolate budino is a bestseller there like here. We have discovered that in Tokyo, people don't drink as much as they do here, which is a shame because we have a nice cocktail program over there, but the wine program is really starting to take off, thanks to Shelley [Lindgren's] hard work with our partners over there.

Given the huge cultural difference between San Francisco and Tokyo, you haven't exactly been thrown into an easy situation. How have you walked the line between doing what you do so well at A16 here in SF and fitting in with what Tokyo is asking for? First, I have an incredible team of talented and motivated people at both locations. Second, wherever possible, we try to keep the menus at both restaurants in sync, with a few exceptions for availability and demand. One important thing that has developed with the growth of the menu over there is our system for developing and standardizing recipes. We are now doing what we should have been doing all along, which is writing recipes in metric, for ease of conversion to the Tokyo kitchen as well as whatever future projects might be in store.

What's the critic situation like over there? Have you come in contact with the Tokyo version of Bauer? The critic situation is a bit different there than it is here, and it seems that the success of restaurants is largely judged by the size of its patronage, so, in that regard, we are doing very well. We were reviewed very favorably in the Japan Times this past March. The review closed with "Too many U.S. restaurants branching out in Japan make the mistake of positioning themselves upmarket” rather than “relying on the core values that put them on the map in the first place — fine, uncomplicated cooking based on quality ingredients. But A16 seems to get it right on all levels."

As you settle into the Tokyo project, how do you want the restaurant to grow? We definitely want to keep fostering growth between the cooks of both SF and Tokyo, with exchanges maybe two or three times a year. Each time someone goes there or comes here, it is to learn new dishes for an almost complete menu change, so it's a really productive learning process that is very ongoing throughout the year. It is really important to me that we train the crew over there to understand our style and appropriate ingredients to the point that we can talk through a menu change rather than physically executing it. We are getting there. Each time there is a staff exchange, there have been significant developments in the systems over there, whether implementing a granita program that mirrors our gelato program, extending items from the menu into the afternoon service, designing special event menus, introducing new wines to the list, etc.

Are there any plans in the works for further expansion abroad? Of course there are always ideas being thrown around. Now that we've passed the one year mark in Tokyo, we're confident that we can do it again somewhere else. Stay tuned.

What's your favorite thing to eat when you're off in Tokyo that you can't get here in SF? I'm a sucker for yakitori and for the casual izakaya style of drinking and nibbling. That's not to say that you can't get it here in one form or another, but the devotion to the chicken and all its parts, and the dedication to the craft of perfect grilling is something special indeed. The game changed with the opening of Ippuku over in Berkeley and I know there is more to come in that department in SF in the very near future, and that really excites me. Also, soba noodles during the day. I haven't really begun that quest here in SF but there are obviously some spectacular places in Tokyo.

What do you miss most when you're abroad? Mexican food. Somebody needs to get on the scene in Tokyo. The market is definitely there for good tacos and burritos.

Where do you want to be a year from now? Right where I am is a pretty great place to be. We are hoping to expand the brand in a few new exciting ways and these should start to surface within the next year or so. We have an incredible crew right now in SF and I want to do everything I can to keep fostering their growth and encouraging them to learn more. I think there will be more travel opportunities for key members of our staff. There are some folks who need to get to Italy, myself included.