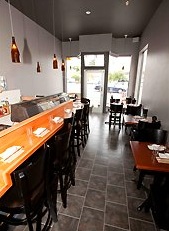 1) Bernal Heights: The good people of Lucky Cat Deli on Cortland opened their first full-on restaurant, Ichi Sushi, on Friday night. According to 7x7, it's a 24-seater offering izakaya fare, sushi, sake and wine and beer on tap, not natch. Grub Street adds talk of shochu cocktails and the full menu reveal. Winter ramen is on the way. [7x7, Grub Street]

2) The Mission: The Blue Fig coffee and sandwich shop we spotted back in May officially opened on Valencia Street this Saturday after a Friday night test drive. So far, key differentiators include oddly shaped waffles and this preliminary shill fest on Yelp. [Mission Loc@l]