Share All sharing options for: Early Critics Weigh In On Cafe Des Amis

Bacchus Management Group erected its first slabs of Cow Hollow Plywood back in 2007, so an inordinate amount of suspense built up before their buttoned up French brasserie Cafe Des Amis finally opened in July. Since the flashy opening party, enough weeks have passed for the waitstaff to settle into its new routine and the kitchen to iron out any glaring SNAFUS. So now a good deal of opinions have built up amongst the boards and the bloggers. Read on for a recap of notable reflections. 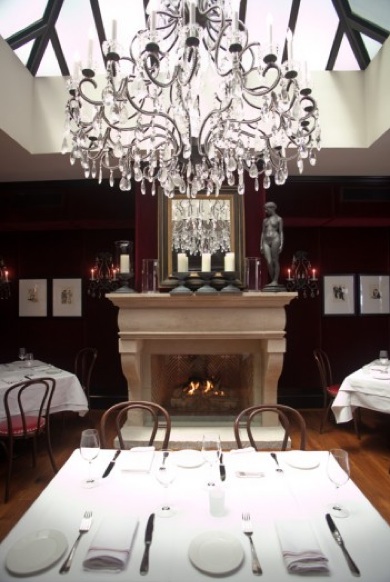 The Good News: From nocharge of Chowhound: "The people behind Spruce obviously know how to run a restaurant and seem to have recruited a bunch of good people. They have ambitions to be open really late a few days a week and to serve weekend brunch, which is nice. The restaurant is a very stylish brasserie with prices within reason (most entrees in the $20-30 range). Should be a nice addition to the neighborhood." And originalfig adds: "The menu and feel remind me a lot of Balthazar in NY - very breezy, bistro-ish feel, down to the food (a greatest hits of bistro classics, including choucroute garni, monumental seafood platters, caviar service, etc.), menu formatting, decor (tile floors, big bar) and the stylish, chaotic feel." [Chowhound]

The Portion Size News: Yelper Kim M. had the "problem" of more food than she could finish: "We had the salad verte and foie gras terrine to start...both portions were quite large for appetizers and we were thinking we probably could have gotten one and split it. For entrees, I got the hanger steak...Again, a larger portion than I'm used to at most SF restaurants, but the steak was cooked to perfection (medium-rare). My hubs got the skate wing, which was also the biggest one I had seen, but he really enjoyed it." However Pippi L. doesn't get a great deal: "For main entrees, we had the lamb chop (too small of a portion for $29), it was well prepared and had great flavors...the cote de boeuf for deux was impressive... Excellent crust and bloody inside. Great piece of meat, good fries, the bearnaise was good (again, too small of a portion), and the bordelaise was more of a jus than sauce. Was it worth $86? Hm, I don't think I'll pay that again. It is simply too much money." [Yelp]

The French Onion Soup News: FoodNut almost called the fire department: Soupe À L’Oignon Gratinee ($9) oxtail and beef shank broth, carmelized onions, gruyere was a very nice and very hot onion soup with a dense cheese crust but came with a big burnt spot that smelled like something was burning. We should have returned it." Amanda G. has a different experience: "We shared some oysters, and the boys had some delectable French onion soup. My husband always orders this, and he said this might have been one of the best he's ever had." [FoodNut, Yelp]

The Decor News: Yelper Lia B. is feeling it: "The minute you step in, you get swept into sensuous, frenetic opulence. What a coup for Union Street (with Des Amis, Betelnut and Nettie's side-by-side), and for that pre-crash feeling of extravagance." And FoodNut ads this touch: "The place was LOUD and packed with the upscale well dressed Marina crowd of yuppies and some older folks from 30?s and 50?s." [Yelp, FoodNut]

The Chef News: A bit of a shill, but Des Amis chef Gordon Drysdale has this for Inside Scoop: "There were a couple of reasons [I joined the restaurant], but probably most compelling was the flat-out beautiful food presented to me by [executive chef] Ed Carew during his tasting. It was deeply delicious, very soulful and referenced the classics in a way that I don’t. And in the end, the reality of our rapidly burgeoning company, with all of its responsibilities, made the decision for me.” [ISSF]

The Wine News: Maneesh B. of Yelp gushes, "One thing they absolutely nail is the wine list. It's huge, and extensive, but not crazy expensive. From my quick perusal, most bottles are squarely in the $40-$80 range. Another *very* french touch is that they offer a number of wines by the "pichet", which is basically a little more than a half bottle, but not quite a full bottle." CG J. adds: "Comprised of wines from France, France, and oh yes, France (with a few Californians thrown in to please the natives), the wine list is extensive, if somewhat single-minded. With a plethora of by-the-glass and by-the-bottle offerings, there is something for everyone, even if one has to get some translation to enjoy it." [Yelp]

So what do you make of it all? Please share additional feedback here in the comments, or shoot something over the EaterWire.