So much goes down in the world of food trucks on a weekly basis, so we've condensed the week's highlights into one quickly digestible blow-by-blow. Herewith, The Week in Trucks. 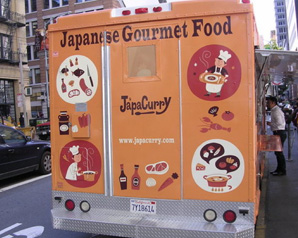 1) After a NIMBY cafe owner ousted JapaCurry from its spot at Second Street and Mission last week, SFoodie reveals the Japanese curry and bento box truck has applied for three new spaces at 110 California, 210 Sansome, and 45 Fremont. [SFoodie]

2) Just about three months ago, Off The Grid founder Matt Cohen mentioned that BBQ was basically untouched in the SF food truck scene. And oh the times...they change! Now we have The Rib Whip and Southern Sandwich showdown in addition to this trailer called Smoke serving Kansas City BBQ in Bayview. Any early favorites here? Place 'em in the comments. [Tablehopper]

3) It was pretty darn warm earlier this week, so the Reveille Coffee truck at Sansome and Pacific has started serving iced coffee. But now it's cold again. [ISSF]

Know of something new and gutsy on the food truck scene? As always, the comments and the tip jar await your additions.