As has been the theme around here, lots of restaurants are opening. Here's a roundup of some newborn places to keep your eye on. Please do us a favor and send in early reports on these guys. It would be delightful to hear from you. 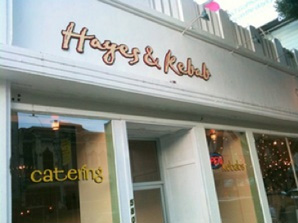 1) Hayes Valley: With the recent arrival of Hayes & Kabab, Hayes Valley's largest and most comely Middle Eastern joint to date, there are now three similarly-themed quick-service restaurants in the span of several Hayes Valley blocks. The other two being Kebabs of Hayes Valley -- which went into the space Hayes & Kebab used to occupy -- and Lebanese Mazzat over on Fell and Laguna. So yeah, it's on. Madame Hopper has lots on H & K's green build-out, huge parking lot, brunch, beer, wine, etc. etc. Hummus, anyone? [Tablehopper]

2) Mission: UrbanDaddy has some pretty pictures and fun facts on Royal Cuckoo, a new bar near the intersection of Mission and Valencia likely to attract the hipster genus. Hint: armadillo taxidermy. [UrbanDaddy]

3) Lakeside: Thrillist speaks of Kasumi, a new yakitori (dinner) and ramen (lunch) restaurant that could be worth your while. The Facebook has some promising pictures of skewered items and sea urchin-topped custard. [Thrillist]

4) FiDi: The owners of Belden's Cafe Tiramisu have opened another Italian restaurant near the intersection of Kearny and Bush called Quattro Stagioni. They're going to make pizza the Neapolitan way, which we've never had before. So curious to try it! Seriously though, the details Madame Hopper has on the menu make it sound pretty good. You should go and then tell us about it . [Tablehopper]