Baker And Banker Reflect On A Busy Year

Share All sharing options for: Baker And Banker Reflect On A Busy Year

This is One Year In, a feature wherein Eater sits down for a chat with restaurateurs and chefs celebrating their one year anniversary. 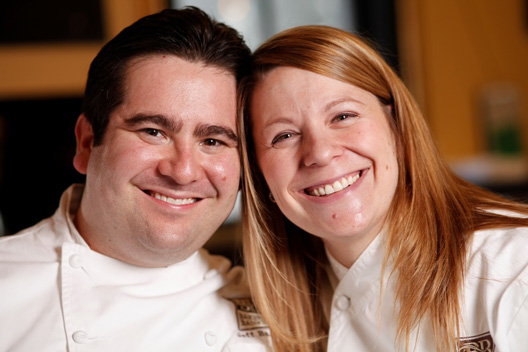 It's been quite a year for Lori Baker and Jeff Banker. The husband-and-wife team bravely stepped into Quince's former Pacific Heights digs on December 1st of 2009, creating an "American brasserie" that would tie down three hard-to-get stars from Bauer. After a subsequent major kitchen remodel and adjacent bakery opening, the powerhouse couple still found time to crank out an addition to their own family. Their little son Jackson was born just about nine weeks ago. Naturally after such a fruitful year, we were eager to sit down and catch up with "the" Baker and Banker in the flesh: on future expansion, the chicken that didn't fly, the critics and more.

What was your vision when you opened a year ago?

Jeff Banker:We wanted to create a really accessible neighborhood restaurant. I think we pretty much accomplished what we set out to accomplish.

Lori Baker: We definitely wanted the bakery to open too by this point, which we opened in August. So that was a big extra hurdle.

Jeff: Yeah, the whole concept was to have a restaurant and bakery doing all the breads and desserts and things.

It's interesting to me that you both have significant fine dining backgrounds. You met through a mutual colleague at Postrio, for example. So I'm curious what inspired you to open something that isn't a fine dining restaurant, per se.

Lori: Well my passion has always lied in American comfort food desserts with a twist to make them a little more upscale. So we're kind of between fine dining and a comfort food restaurant. I think we both feel that fine dining for us was just a little too stuffy of an atmosphere for a place we wanted to be every day. We wanted to be the type of place where people could come once a week, not once a year. So that was really important to us.

Jeff: Also, I think for me I've had plenty of the four-hour meals in my life and I've kind of gotten tired of that. I think you should definitely be able to get great food, but often the sake of fine dining is taking food to a level that isn't always so comfortable for people. And I really didn't want to exclude people. I could have taken the four star restaurant route, something kind of like what Quince was doing, but, first of all, I never felt that this was the space to do this. I feel this space is more suited to a neighborhood establishment. And you know it goes back to accessibility, making it a place where not just a certain group of people go, but where anyone from foodies to people who want a more casual experience can go.

Do you get a lot of walk-ins? Or is it more reservations?

Jeff: It really varies, depending on the day. We do get a significant amount of walk-ins on the weekends. We get a lot of people who call last minute. Sounds like me [thinking]. We don't reserve the wine bar, so that's usually full during prime time. That's always been so people in the neighborhood can come in and eat. So it's usually full by 7? Yeah, 7:30 or 8. We serve the full menu there too.

It sounds like everything's gone to plan for you guys. I'm curious if there's anything that surprised you from the outset.

Lori: The only thing I can think of is how dressed up people get to come here. 'Cause I envisioned it -- I mean with the decor and being medium priced -- I want people to be comfortable coming in in jeans.

Jeff: I think people still look at this place as a special occasion place. The three stars from Bauer might play into that. Yeah, Yeah.

What about menu items that maybe didn't fly?

Lori: Oh, I know one! Chicken.

Jeff: Yeah chicken actually ended up being a big dud on my menu.

Lori: We thought we had to have it on there, and then no one ordered it. People were a little more adventurous than we thought.

Jeff, you've said you were looking for something off the beaten path when you found this space. Why did you want that?

Jeff: You know it's interesting, I think there's a certain amount of charm in coming to this restaurant. It's like you can go out of your door and walk to somewhere on Fillmore and there's a ton of restaurants, but I really wanted something that was unique and on it's own.

I think that's why you're getting the adventurous eaters.

Jeff: : Yeah, people come here specifically to eat at Baker and Banker. It's not an afterthought and that's the reason why they're here. For me, I think I really wanted it to scream San Francisco. The whole concept of this thing is to scream this is a San Francisco restaurant, you walk into an operating bakery that's part of a big working kitchen. When we found this space it clicked, and I don't think it came out any differently than we expected it to come out.

Lori: We didn't know what to picture with the interior. And we told him [architect Michael Brennan] our vision. And he knew.

It's clear you were in love with the space from the beginning, but did you have any fears entering the space that used to house a restaurant as revered as Quince?

Jeff: I knew there was always going to be the comparison. But really over the last year, it's been a lot less. I always wanted that because when you say it's where the old Quince used to be, everyone knows. It's kind of marketing in it's own way. It was actually part of the allure for the place. Also getting the farms that he [Michael Tusk] already had delivering here wasn't going to be a problem because they're already used to it.

What was the biggest shocker of your first year?

Jeff: That we stayed busy.

Lori: Yeah, we had no idea! If it was going to be busy or what. It was busy on day one.

Jeff: There were some slow times before we got reviewed. So the great Bauer review really created a marked shift? We did see a shift immediately. There was a dip thorough the summer, which is a normal thing in San Francisco and then the holidays spiked up pretty significantly again. It definitely was an impact on our business. If we got a bad review, we knew that was going to be a bad thing. We knew we had to get a good review.

So were you aware when Michael Bauer was in the restaurant?

Jeff: I have no idea who he is or what he looks like [smiling].

Lori: We're going to have to say no comment [laughs]. But Josh Sens is anonymous. He's totally anonymous. Jonathan Kauffman I don't know what he looks like, or Paul...Paul Reidinger. And they all liked it, so. Yeah we have no idea what Josh Sens looks like. Although he used his own credit card. So we kind of sneaked a peak at him at the end.

I'm sure opening the bakery on August 1 shifted things considerably. What were the biggest adjustments?

Jeff: The space became a lot smaller. Before we had oodles of room and now it's like everything shrunk into this small little kitchen. That was the biggest impact. It became a lot busier of a kitchen.

Lori: We had to make room for all the dairy and cakes in the walk-in. That was a challenge.

How did it affect the menus in the restaurant?

Jeff: If anything we'll incorporate more baked things into the restaurant dishes. It's still a work in progress. We're still getting more and more comfortable with the products we're doing and we're starting to do new breads and do more artisan kind of deals and the plan is that we're going to start doing more savory sandwiches out of the bakery, like hot pressed sandwiches, paninis, but using stuff that we're already making in the restaurant. Like I'll buy whole pigs or half pigs. So taking the loin and turning it into a roast that I'm going to put into a homemade Cubano. Where do you get the pig from? Mark Pasternak. In fact we're going to be doing a Devil's Gulch night probably in the beginning of March. So he's going to bring all of his own wine and his own cheeses. We'll tell you all about it.

Ah, we're so lucky. Ok, I'm also curious to know what continually inspires both of you in creating the menu here.

Jeff: Asian. I traveled to Vietnam and took cooking classes there. So for me, getting to use some of those things that I learned back in Southeast Asia are helpful.

Lori: For me, the most exciting thing is remembering all the restaurants I've worked in and creating things and having the chef say, "no, you can't put this on this menu" or "that doesn't work here." And now, I can do whatever I want and express myself the way I want to and put out what I've always wanted to do.

Anything specific that comes to mind? My pumpkin cobbler that I do every year around Thanksgiving. I actually use butternut squash because it's easier to deal with and tastes exactly like pumpkin. I always wanted to make my own breads. I've never worked where I've had the room to do that. I love making my own ice creams. It's a dream come true.

Jeff: We want to keep promoting the bakery, but doing more special events like the Devil's Gulch night, or wineries, or having guest chefs come in, maybe even doing cooking classes -- like where we would do a demo and then folks would sit down and have lunch. You know and what we've kind of kicked around was maybe expanding the bakery section of the business, branching out and having other locations, moving the bakery and putting those on actual busy streets. Since we're doing it here anyway, that's some of the thinking we've had. How we're going to expand the name.