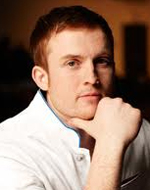 Happy days over at Saison as Josh Skenes tweets that he's been promoted from one star to the coveted land of two stars: "Congratulations! to the entire Saison Team for 2 macaroons this year. It is an honor. Thank you! @MichelinGuideSF" Again, wait for the full reveal on newly Michelin starred and un-starred restaurants later today. [@saisonsf]