Share All sharing options for: Cotogna's Michael and Lindsay Tusk 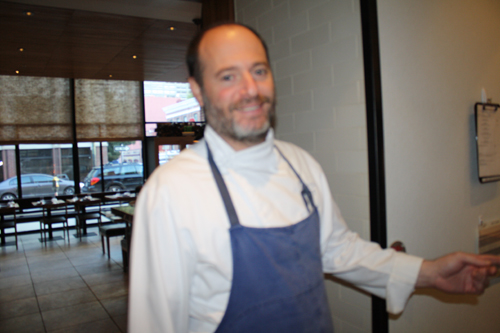 It's been just under one year since chef Michael Tusk and his wife Lindsay Tusk opened the more casual trattoria-style Cotogna, right next to their other Jackson Square restaurant, Quince. In interviews around that time, chef Tusk expressed a lot of excitement for a new, more casual style of cooking in Cotogna's wood-burning oven and rotisserie—an excitement that clearly transferred through, keeping the place solidly packed since day one. This week we sat down with the Tusks once again to see how the first year went from their perspective, and to find out what's up next.

How did Cotogna come about?
Michael Tusk: Once we decided that we were going to move [from the original Quince location that Baker and Banker now occupies], it was just a great opportunity to have the two dining experiences in one building. This offered us the opportunity to weave a fine dining experience on one side, and something completely different, like a trattoria, on the other side.

So it sounds like something you were thinking about for a while at the old space.
MT:These restaurants kind of take on a life of their own. Things develop and you go in a direction that not only you want to go in, but that your guests at the restaurant want to go in. When we opened the old restaurant, the economy was kind of down, so it gave new chefs the ability to get in. And I think 9 or 10 years later, you're seeing some parallels with some younger chefs and business owners that might not have been able to be able to get something open in a different economy.

Did the development of the Cotogna menu, affect Quince's food?
MT: I don't think creating on either side is ever easy, but I think it's easy to give the guests a straight forward flavor profile—whether it's from the North or the South—over at Cotogna. For me, it's a great dichotomy because something that I might have done five or six years ago at Quince, guests will request it, so it's nice for me to be able to make that for them again.

So you're bringing back things from the old Quince at Cotogna.
MT: Yeah you'll see some dishes. And then the great thing about it is that at the old restaurant, I didn't have the wood-burning oven and rotisserie so that leads to a totally different dynamic. Not just the grill, but I think the rotisserie was the more exciting item because you can put a simple grilled fish on one side, and it hearkens back to an older way of cooking things, but it can't be beat for a simple spit-roasted dish.

Isn't it impossible to get a permit for wood-burning cookery?
Lindsay Tusk: We were lucky. It was grandfathered in at that location. It was here.

MT: People like watching the interaction with the chefs and the fire. I don't know anyone else who has the combination. They had it at Chez Panisse and it was something I always liked to use because you can cook different parts of animals different ways. It allows you a certain amount of diversity with the food. Vegetables too. You can cook different vegetables in the ash. It's just funner to cook after having six to eight burners for years.

How did the opening go?
LT: It's never smooth. No matter how many openings you do, or how prepared you feel, you're never prepared. There are just so many moving parts. And then, for us we already had an existing operation under one roof, and how to integrate the back systems was a big challenge. Some things that the guests don't see.

MT: We suddenly had double the guests and staff going into different areas, and you never really know when you're going to open. I had to go to an event, and we had to open while I was away, because we were supposed to open, like two months earlier. I think even with super-experienced restauraterus, you're going to have hiccups. I kind of start to get comfortable almost nine months or a year in, when you can reassess next steps.

What big changes or tweaks did you make in the beginning?
We kept adding layers to the menu. You see what people are enjoying, and then the guest at the end of the day is really going to tell you what should stay on the menu. And then you constantly try to surprise them a little, and certain things become fixtures.

I'm curious about this dialogue, what things did you know you had to keep on the menu in the beginning?
MT: The roasted pork right off the bat, and the housemade ricotta that we were baking in different fashions. The carrots with the honey from the roof. People seemed to like that.

MT: And then some pastas that I might have done the first year we opened at the other restaurant, so I kind of broke out some things. It was great. That process was fun. Some guests would remind me of past menu items I wouldn't remember and I'd look back and reinvent it.

On to the critics. Were you aware when they were in?
LT: Cotogna is such a small dining room, so you kind of know most everyone when they're dining.

So what happens when a critic walks in?
LT: At that point you can't do too much. You know, it is what it is. You make the best show of it, but the menu is already written, the food has been prepared, your staff is your staff, your training is done. I'd definitely have to say I don't get quite as anxious as I used to.

So you're used to it.
MT: You never get used to it. As a chef you're always on edge all the time, it's something that's with you all the time. There are so many different parts in the restaurant business that you have to be aware of all of them at any given time, also for a more casual restaurant.

Comparing opening the first Quince to opening Cotogna now, how has the landscape for opening a restaurant changed?
LT: That first location was very unique. It was a little bit out of the way. It was a quiet opening in 2003, we didn't have many resources. I think it was when the dot com bubble burst and things we're starting to come back around. People were starting to feel optimistic again. We didn't have any PR, it was just kind of word of mouth. Now to open a restaurant you have to have a very comprehensive, cohesive vision when it comes to how you're going to market it. People want information and they want it quickly, so you have to have all those systems set up, whether it be a website or some kind of social media. If you can do it by yourself, more power to you. I do find that you probably need some professional help. At the end of the day, word of mouth though is the most powerful tool.

MT: I don't think we had a website when we first opened Quince. It got embarrassing after a while so we finally got one. You kind of make do with what you have. You just have to scratch and claw to figure things out. When we opened I wanted to cook more Piedmontese food, because that's what inspired me at that time. You cook differently every year. So much happens in the world around you year after year.

Do you think it's harder to open a restaurant now?
MT: I'd say it's never easy, but before, nobody would care what the restaurant was going to look like before it opened, or what day it was opening, or what the original menu looks like. Now you have to have a vision because they want to know anything and everything. Back in those days you could fly underneath the radar and let one thing set the tone for the restaurant and then work on other things. So I'd say for younger chefs there's definitely a little more pressure.

As seasoned restaurateurs, what did you learn with the opening of Cotogna?
LT: It's the first time we've done casual dining. That was interesting for me to deconstruct. The same effort goes into fine dining as casual, the expression may be different and maybe it's not as labor intensive in the kitchen. There are less people in the kitchen. But it's the same value system, culture, thought to sourcing and caring about ingredients, same level of training.

How about surprises?
LT: How well people responded to the fixed price wine list. I didn't realize all the different dynamics that sometimes go into choosing a bottle of wine. But it definitely took the anxiety away. If you're on a date, there's no pressure. $40 doesn't make a comment about how much you care. Also with business meals, it creates a level playing field. It becomes more about taking chances with wine and it's a comfortable price point to do it. I give David Lynch a lot of credit for that.

What are you excited about in the future?
LT: Vacation. We cancelled a couple times, but I think the first of the year: Italy, Piedmont, and then Spain around San Sebastian.

MT: Maybe San Paolo too...We've also been redoing the lounge here at Quince. It'll be finished in another month or so. We'll have a new lounge menu in here, new tables are coming. We're about half way there. There's a lot of new art work I'm excited about up on the Cotogna side, but with the wall space in Quince, you'll have some new images that are being framed right now.

MT: More table-side service at Quince too. New sequences. Little bit more flourishes, like a Negroni Manhattan cart. The art is three weeks or so away. It's like your house. We spend more time than we do at home, so we're always trying to make it more comfortable. We're really layering on what we started with.

Who did the art?
LT: Joann Verburg, you can find her on the Pace/Macgill website. She had a retrospective in MoMA in New York. It's part of her olive tree series. Beautiful pieces. [Smiling] We seem to have a thing for trees.

MT: We do like it down here. I always thought for a two block radius it's always been interesting to me. It's exciting to see new people coming in like Aziza.

LT: We're also going to go to continuous service at Cotogna. The full menu will be offered all the way through. People that work in the Financial District keep such different hours. They get off earlier and they're hungry.

MT: And the guest chef thing. We want to bring in people who worked at the original restaurant to do special dinners, Brandon Jew, Thomas McNaughton. And people like Ryan Farr that may not own a restaurant but that are going to put out a book. I wrote a little forward to his book, Whole Beast Butchery, so I'm like, we've gotta do a signing here. We'll do a meal with a book included.

Where do you guys eat when you're off?
LT: We usually go home, but late night dinner at Cotogna is nice for us.