The Relevance of Michelin, Chefs & Critics Weigh In

Share All sharing options for: The Relevance of Michelin, Chefs & Critics Weigh In 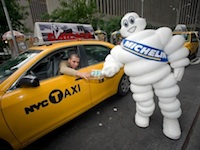 What effect does the Michelin Guide have on restaurants, both those that can be rated and those outside the Michelin galaxy? In the thick of Michelin season, Eater National asks chefs and critics to weigh in on how the stars align. From SF Weekly's Jonathan Kauffman: "the only starred restaurant this year doing simple, classic, California-Mediterranean food is Frances. Others cooking at the same level, like Chez Panisse, Camino, and Range, don't make the cut...I think Michelin demonstrates its irrelevance there." Read much more over at Eater National. [-EN-]