Man oh man, quite the busy week of restaurant openings this week. It being Friday and everything, let's take a few moments to reflect on everything that's newly new around town. Are you sitting down? 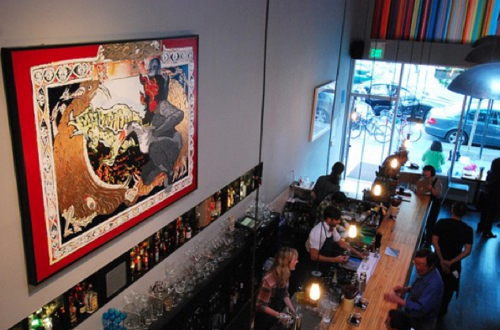 Wo Hing's bar is made out of a repurposed bowling alley. [Photo: Jennifer Yin]

1) The Mission: It's Wo Hing General Store time on Valencia street tonight as Charles Phan's latest project opens its doors to the public after a week of private parties and test dinners. You guys have been good, so we're also passing on the finalized food menu and cocktail menu for ogling purposes. Dinner will now be served nightly from 5:30 p.m. to midnight. Lunch coming soon. Here's the website. [EaterWire]

2) The Marina: After a few small delays, Super Duper opened on Chestnut Street at 12:30 p.m. on Tuesday. Hours will be 11 a.m. to 11 p.m. Sunday through Thursday, and until 3 a.m. on Friday and Saturday. Not too many options open that late in the Marina (or anywhere, for that matter) so it should be good for business. [EaterWire]

3) More Marina: According to the fashionable ladies over at Daily Candy , that Marina Southern food spot we've tracking, Cedar Hill is opening today too. Here's our earlier look at the interior and the menu. [DailyCandy, EaterWire]

4) Mid-Market: Pearl's Deluxe Burgers opened its second San Francisco outpost on Market and Sixth on Wednesday. Daily hours here are 11 a.m. to 10 p.m., and until 11 p.m. on weekends. So now we've got a new Umami Burger, Super Duper and this in town. Burgers never cease to amaze. [EaterWire]

5) Inner Sunset: What else do people like? Pizza. And Patxi's Inner Sunset location opened up to big crowds on Monday. Fun fact: did you know that the owner "Patxi" Azpiroz is from Basque country and loves him a good Torillia española when he's not eating pizza? [EaterWire]

6) Civic Center: The super bright yellow-and-red Happy Donuts signage is up at the former Taco's Sandwiches joint on Sixth St. Following the location's great tradition of serving things not advertised by it's name, Happy Donuts will also be a great place to get Louisiana fried chicken. [LiveSoma]

7) Berkeley: Out on Telegraph, the former Locanda da Eva has enjoyed its third paint job in the past year and will now be known as the "farm to fork" Origen. At the very least, these people know their audience. [EaterWire]

See something missing here? Do tell in the comments, or drop a note here .