A staggering number of restaurant openings took San Francisco this week. A Michelin-starred chef hit Nob Hill with Keiko a Nob Hill, the bbq boom continued in the Mission with Southpaw, and two Thai restaurants: Osha and Lers Ros, open new outposts today, on lucky 11/11/11. But really, that's just the beginning. Have a look below. 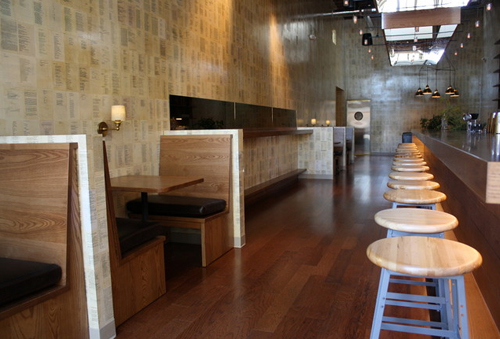 1) Oakland: Daniel Patterson's Plum has gotten a lot of nice attention from the critics around town since it opened a little over a year ago. As of today, it's getting a bar too. Scott Beattie has created a list of seasonal takes on classic drinks, like he does, while standard American fare such as grilled cheese and a burger get the D-Patt treatment on the bar menu. Interestingly they're doing a seatholder program here similar to the one Patterson is consulting on in NY. Those who invest $500 get 20% off bills, plus further special treatment for the life of Plum and Plum Bar. More information on that, and the menus, can be found here on the website. 2214 Broadway, Oakland, 510-444-7586. [ISSF, Thrillist]

2) The Mission: On Tuesday, Izakaya Yuzuki opened in the old Craig's Place/Ebb & Flow spot on Guerrero and 18th. People say the space is cursed, but owner Yuko Hayashi is convinced she can break it with an on-trend izakaya. 598 Guerrero St. 415-556-9898 [EaterWire]

4) Embarcadero: The Melt opened its second location at One Embarcadero with new melt-soup combos and three new dessert melts: s'mores, raspberry shortcake and "no nut pb & j." Beer and sparkling wine are also now available. The third one (345 Spear Street) is en route on the 14th. No number listed. [EaterWire]

5) Tenderloin: Peruvian/Spanish restaurant Fina Estampa came back with a totally remodeled decor and The Tender has a look at the menu. 1407 Bush St. 415-348-1685 [The Tender]

7) Outer Mission/Bernal: Madame Hopper reports that the Mission St. version of North Beach wine bar Dell-Uva has opened at 3235 Mission St. And as promised, Doctor's Lounge is saying hello today too with a special treat from 11:11 a.m. to 11:11 p.m. [Facebook, Tablehopper, EaterWire]

Early reports on these newcomers and others are always received with gratitude over the EaterWire, or below in the comments.