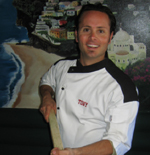 Pizza juggernaut Tony Gemignani has taken over the shuttered Pulcinella in North Beach to open an Italian restaurant called Capos (Italian for "bosses"). So far, he is being coy about the concept, but he has revealed that it will have three ovens, is not Neapolitan, and will offer several menu items never-before-seen in North Beach. If we know Tony, it probably won't be pizza-sized hamburgers either. Any good guesses out there? It should open around the end of February. [ISSF]