This is The Gatekeepers, in which Eater roams the land meeting the fine ladies and gentlemen that stand between you and some of your favorite impossible-to-get tables (and in this case, drinks). 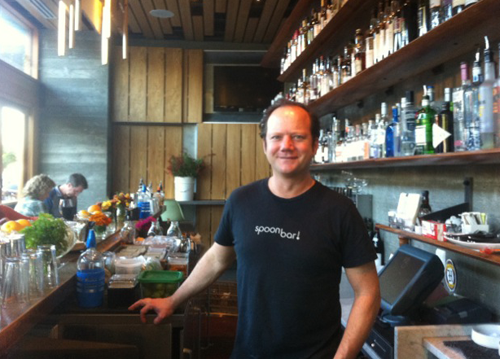 Last Eater heard, Scott Beattie was headed to the W Bali to serve as the "U.S. famed mixologist" shaking drinks inspired by Indonesian ingredients. It took a lot for him to get to this point. In the past year, he helped his buddy Mateo Granados create the garden-fresh tequila cocktail menu at Healdsburg's new star-studded Mateo's Cocina Latina, rubbed elbows with Daniel Patterson to get Plum Bar's new cocktail program off the ground, and now he's on board with the Hog & Rocks boys. Meanwhile Beattie still consults on the cocktail program at Cyrus—the one that originally put him on the map a few years back, and still mans the bar four nights a week at Healdsburg's bustling Spoonbar restaurant—where you see him here, looking remarkably refreshed and unstressed. We managed to snag an interview with Beattie to give him the Gatekeepers drill.

7:45 PM on a Saturday night. What’s the wait for a table? Many people are just waiting to be seated for dinner, a lot are going to weddings or eating somewhere else, so there is plenty of turnover. We also have two bars with a total of 20 seats and a lounge in the back. People have drinks back there too. So we have quite a bit of space with plenty of turnover.

Have you ever been offered gifts or cash in exchange for a seat? I can’t accept gifts or cash. It just can’t happen. Under no circumstances could you ever ask someone to get up from a table or a bar seat unless they had told you they were going to be there for a specific amount of time, and then they stay there longer than that.

What about when VIPS come into the restaurant? If there's a celebrity who looks like they may get harassed where they're sitting, we may try to move him or her, but other than that, we don't bup reservations. I wouldn't do it for my own mother. We're very democratic.

Have you ever been offered anything outlandish? I’ve been offered a $100 for a seat at other places. I could forsee a situation where if someone wanted to offer $100 directly to the person sitting in their desired seat, I don’t think that would be terribly offensive. But if Sean Penn comes in and wants people to move that would be incredibly rude.

Tell us about your favorite customers. I like enthusiastic ones, people that are engaging with me and curious about cocktails, and they want to take the classes that I teach and they want to learn, they want cockatil recipes. I remember when I went to see Ferran Adria speak in San Francisco, and one thing he tried to impress is “you don’t know shit.” You could spend a lifetime learning about citrus alone, and that's just citrus. I’m always learning and I like to see people who want to learn too.

Where are you eating when you're not busy with one of your many jobs? Diavola in Geyserville. I love that place. I’d probably go eat at Scopa if I could get in, but it’s so tiny that it’s hard to drop in, but Diavola is twice the size and they don’t take reservations, so it’s easier to drop in. If I’m in SF I eat at Yank Sing. If they don’t have one of those in heaven I don’t want to go.

Anywhere else in SF? I ate at Wo Hing the other night and had some great drinks by Brooke Arthur. She has all this cool antique glassware. We got a salt and pepper calamari type thing, four different kinds of dumplings, a lamb skewer Charles sent out. Everything was fantastic and I didn’t even get into the noodles. I also had the steak tartare at Wayfare Tavern last night and it was the best I’ve ever had, when you scoop it up with the popover they give you, it’s texturally incredible.

People always tend to order the same things over and over at bars. What’s the item on the current menu that more people should know about? The most popular drinks are the cucumber Collins, the dark and stormy and the Manhattan. I steal deal with the fear of gin, people taking really balanced gin drinks and asking for them with vodka. I’ll just be like, "Can you just please try it with the gin?" If you don’t like it, I’ll change it. We do our gimlet with the new Terroir gin and also Blade gin made in Belmont. They don’t carry that heavy juniper taste people associate with gin. When you combine fresh herbs with the notes in the Terrior and the Blade it’s very seamless.

Is there any one accolade or press hit you can associate with a bump in reservations or a different breed of clientele at Spoonbar? I will say that the Press Dem review, when that comes out, you get a lot more people from Santa Rosa and Petaluma come up. A lot of people who don’t eat out a lot save those articles by Jeff Cox and come in on special occasions. They’ll come in and order exactly what was in the review that went out 6 months ago. They’ll corder the squash blossoms in December. Of course, we don't have squash blossoms in December. Michael Bauer reviews will definitely generate more visits from people in SF. Our local paper, the Press Democrat, has more immediate influences on a day to day basis, but the Chron has more long term influences.

At the end of the day, what’s the one Gatekeeper tool you need to do your job? My jigger. My Oxo rubber and metal jigger.

How about in a more of a job skills sense? Humility I guess. I think you have to remind yourself that you're in the hospitality busineses. And you're not the shit no matter how good you think you are. There are many talented people working in this business. I have to get people a good drink, and be hospitable and be friendly. It’s hard when you’re distracted by whatever may be going on in your personal life. You can’t have a bad day. You have to turn it on. It can be challenging. Nobody wants to hear about your bad day, they want to have a nice time, and have a nice drink. They’re cocktails. They’re supposed to be fun, and the day they stop being fun, I shouldn’t be making them anymore.